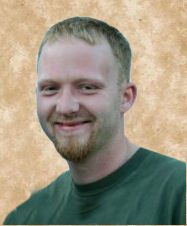 A sudden heart attack took our beloved Shawn from us on Sunday afternoon, July 17, 2016, at the age of 37. Shawn was born in Appleton on December 18, 1978, the son of Robert Meyer and the late Betty (Vandenberg) Meyer. On June 20, 2008, he married April Roberts at a ceremony at the Medina Wedding Chapel. Shawn received a diploma from Appleton West High School and held several different jobs. Most recently, he was working as an Uber Driver – it was the perfect job for him and gave him great satisfaction. Everyone who knew Shawn knew how gentle he was with children and with pets. Often they would bypass their own families or owners to gather around him. He seemed to speak their language. One of his loves was his 17 year-old cat, Honey, who was pretty possessive of Shawn. He also enjoyed spending time with April outdoors, hiking, camping, and taking photographs. Many will know Shawn and April from their involvement in the ADI dart league in the area.

Shawn is survived by his wife: April Meyer of Appleton; his father: Robert Meyer of Menasha; a brother: Shannon Meyer of Menasha; and his grandmother: Lucille (Rollie) Vandenberg of Greenville. April's parents are: Leo (Susan) Roberts of Manawa; a sister: Jessica (Randy) Beckendorf of Appleton; and her grandmother: Shirley Lorge of Manawa. Shawn was also a special “uncle” to Angelina Much, Tiffany Much, Emma Smith, Chad Gruenwald, and Mackenzi Gruenwald. There are also many aunts, uncles, cousins, and friends that will miss him. Shawn was preceded in death by his mother: Betty Meyer; his grandfather: Paul Vandenberg; grandparents: William and Patty Meyer; two aunts: Linda Fuerst and Jean Vandenberg; and an uncle: Dick Huss.

Funeral services for Shawn will be held at 7:00 PM on Saturday, July 23, 2016 at the Wichmann Funeral Home, Tri County Chapel, 1592 Oneida Street in Menasha, with Rev. Jill Meyer officiating. A private burial will take place at Highland Memorial Park in Appleton. Family and friends are invited to gather at the funeral home on Saturday afternoon from 4:00 PM until the time of the service. For more information or to share a memory, please visit www.wichmannfargo.com.