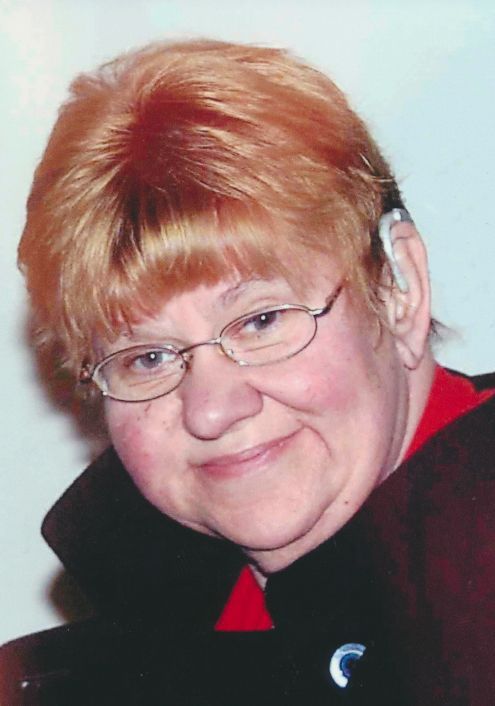 Sally passed into the arms of her best friend, Jesus, on February 21, 2015, following a long, debilitating battle with frontal lobe dementia. Despite her mild cognitive disability, deafness since birth, and muteness from medication which was prescribed to fight her disease, Sally continued to light up her surroundings with smiles and eye contact that could pierce one's soul.

Sally was born in Cudahy, Wisconsin, on October 13, 1958, where she lived until 1993 when she moved to Neenah, Wisconsin, to live with her sister, and brother-in-law, Richard (Spike) and Susan Littmann. Sally is further survived by her niece, Caroline (Michael) Bryan, and her nephew, Jonathan, who were the great loves of Sally's life. Sally also left behind many cousins –the Metz, Grafton, Slivinski families – and her childhood friends, Sandie, Suzie, and Sherri Gresk.

Even though any one of Sally's handicaps would devastate most “normal” individuals, she was able to live “a wonderful life”. Sally proudly held several jobs throughout her life as a cleaning lady for local hotels. Sally took a cab to work daily at 4:30 AM, and bussed home later in the morning, stopping at local businesses to spend some of her hard earned wages. Sally treasured her church and supported St. Mary Parish in Appleton as best she could through weekly donations and volunteering to clean on Fridays when she was able.

Sally loved bowling, swimming, reading, working on crossword puzzles and spending time with her family. Sally inspired her sister and niece to vocations that centered on helping individuals with special needs.
Sally was preceded in death by her parents, Leo and Rita Slivinski, her grandparents, Edwin and Caroline Buchholtz, Albert and Frances Slivinski, and her dear friend, Father Michael O'Rourke, whom she referred to as “her brother”.

Sally and her sister extend their deepest gratitude to:

Her brother-in-law, Spike, who put his life on hold by welcoming Sally into his home whenever she needed her family – especially over the last two difficult years.

Dawn Krueger, Sally's IRIS consultant, who collaboratively made sure that Sally's needs were met.

Caregivers- Jennifer, Erin, Lisa, Kayla, Joni, Heather (Preferred Homes), Chris, Brittany, and Marie (Home Instead), who treated Sally with compassion and respect throughout the last year and a half of her illness.

Laurie Tank, DHS social worker, who went beyond her job by enabling Sally to have the best life possible.

Lakeside Packaging – especially Alan – who helped Sally regain the dignity of being a contributing member of society when she could no longer work in the community.

Affinity Visiting Nurses – especially Laurie, Nancy and Cliff – who were able to make the end of Sally's life as comfortable as possible.

Dr. Todd Talbot, who provided stellar care for Sally for many years.

Father Jim Leary, Father Bob Lexa and Father Bill Schwitzenberg for the calls, visits and blessings they bestowed on Sally.

Visitation will be held on Wednesday, February 25th, from 1:00 p.m. until 2:00 p.m. at ST. MARY CATHOLIC CHURCH, 312 S. State Street, Appleton. A celebration Mass of Sally's life and faith will follow at 2 p.m. with Father Jim Leary and Father Bob Lexa concelebrating. Please plan to stay and enjoy a meal with us following the service.

In lieu of flowers, a memorial has been established to support the CIA + Faith Mission Operatives, Father Mike's ministry which provides scholarships and faith-based education for the Fox Valley. Checks can be made payable to Come Follow Me, Inc.