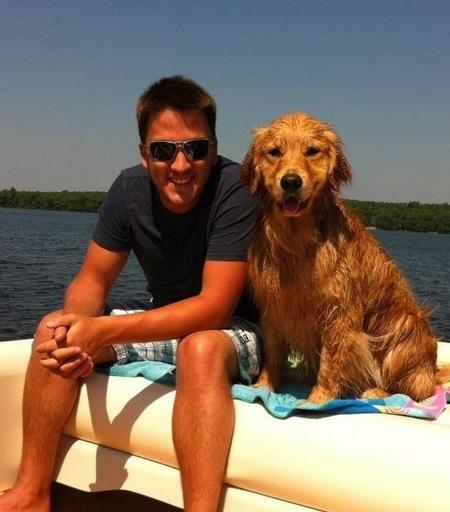 Ryan C. Brunner, age 28, passed peacefully on Friday evening, November 8, 2013, following a short but courageous battle with cancer. Ryan was born in Burnsville, Minnesota on February 3, 1985, son of Bill and Sue (Tierney) Brunner. He was a 2003 graduate of Appleton North High School where he played football, was a standout in the choir, participated in school musicals and belonged to the youth group Young Life, where his journey to become closer to God was sparked. Ryan attended and graduated from the University of Wisconsin – Eau Claire in 2008 with a degree in Business Administration. Here, he shared his beautiful voice as a member of the Singing Statesmen. Throughout high school and college, he was fortunate to have traveled throughout the world sharing the gift of music to places like Norway, Estonia and Brazil. Closer to home he loved to share his angelic voice at family gatherings, campfires, and Karaoke. Following Ryan's graduation from Eau Claire, he made a career in the field he loved, software sales. Ryan enjoyed traveling and looked forward to family trips to Hawaii, Jamaica, Mexico, The Cayman Islands, and Florida. His favorite spot was on the back of the pontoon boat spending time with family and friends at the family cottage on Roberts Lake. Ryan participated in the Community First Fox Cities Marathon as both a volunteer and competitor for many years and volunteered as a Junior Achievement mentor while living in Minneapolis and Chicago. Ryan's love of animals, especially his golden retriever Samantha, brought him to volunteer for local humane societies. He was also an avid fan and shareholder of the Green Bay Packers. He had many roles in his short life, but the one he enjoyed most was that of being Godfather to his cousin Lexi and to his brand new niece, Hailey.

Ryan will be sadly missed by his parents: Bill and Sue Brunner of Wabeno; a brother: Eric (Laura) Brunner and their daughter Hailey of Greenville; a sister: Ashley Brunner of Milwaukee; his maternal grandmother: Jean Tierney of Appleton; aunts and uncles: Cathie (Maury Dresang) Tierney, Laurie Tierney, Scott Tierney, Michael Brunner, Becky Kubiak, and Jim Boehnlein. There are also many cousins, relatives and dear friends. Ryan was preceded in death by his maternal grandfather Jim Tierney, his paternal grandparents Norbert and Helen Brunner, and an aunt Madonna Boehnlein.

A memorial service to celebrate Ryan's life will be held at 11:00 AM on Thursday, November 14, 2013 at First Congregational United Church of Christ, 724 E. South River Street in Appleton, with Rev. Jane Anderson officiating. Family and friends will gather at the Wichmann Funeral Home, 537 N. Superior Street in Appleton on Wednesday from 4:00 PM until 7:00 PM and again at the church on Thursday morning from 9:30 AM until the time of the service. In lieu of flowers, a memorial fund in Ryan's name is being established.

The family would like to offer their sincere thanks to the outstanding caregivers on the 7th floor at Appleton Medical Center who cared for Ryan these past months. Our family is also grateful to close family friends Mary Brockman Degroot and John and Pam McCulloch who have cared for Ryan's Dog Samantha and Bill and Sue's Dog Daisy. Also a very special thank you to Dave and Paula Rosene who have spiritually lifted us up through this difficult time. We will forever remember your kindness.