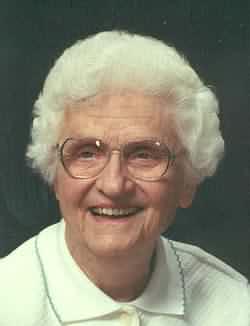 On June 7, 1941 Ruth married Winton Schumaker in Shawano, Wisconsin. They were married for sixty-one years and lived in Appleton their entire married life except for a brief period during WWII. Ruth taught voice and piano lessons for many years and directed junior and adult choirs at Memorial Presbyterian Church, Emanuel Methodist Church, and First United Methodist Church, all in Appleton.

Ruth was very active in the Appleton community. She was a member of Sigma Alpha Iota music fraternity, Wednesday Musicale, and the Fox Valley Symphony League. She served on the Boards of Casa Clare, the YMCA and Visiting Nurses Association. She helped organize FISH, a helping organization for people with special needs. She was a volunteer for the Hospital Auxiliary, Meals on Wheels, and the American Cancer Society‚Äôs Reach for Recovery Program.

Ruth was involved for years in Church Women United, served three years as President, and received their Valiant Woman Award twice. In 1977 she received training and became a United Methodist Certified Lay Speaker and gave her sermons at various churches in the Appleton, Shawano, and Lakewood areas. She was active in the First United Methodist church with the Boards of Mission and Worship, and was a teacher of adult education.

Ruth and Winton loved camping and this led them to build their own cabin at Lake Archibald where they loved to spend their summers with their children and grandchildren. Ruth was also interested in traveling and enjoyed trips to Europe, China, Israel, Australia, and Alaska. She enjoyed attending concerts, reading, bridge, and water skiing.

She was preceded in death by her husband Winton on September 4, 2002, and her parents Arthur and Delia Iwen. She is survived by two daughters, Carol (David) Dorsey of Chippewa Falls, Wisconsin and Ellen (Jim) Matthews of Austin, Texas; a son, Paul (Lynn) Schumaker of Lawrence, Kansas; a sister, Marjorie (Jay) Buckley; and six grandchildren: Caleb and Alexis Dorsey, Jesse and Scott Schumaker, and Tim (Stephanie) and Ryan Matthews.

A memorial service will be held at First United Methodist Church, 325 East Franklin Street, Appleton on Tuesday, July 29, 2003 at ll:00 a.m. with the Rev. Kent Ingram officiating. The visitation will be at the church from 9:30 a.m. until the time of the service.

In lieu of flowers, friends may send memorials care of Carol Dorsey, 642 Heritage Court, Chippewa Falls, WI 54729 for the First United Methodist Church in Appleton, the Community Foundation for the Fox River Region, or the Alzheimer‚Äôs Association.