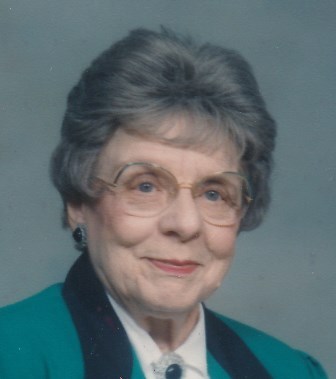 Ruth Mildred Halverson, age 97, passed to eternal life on Thursday morning, April 3, 2014 at Brewster Village. Ruth was born September 25, 1916, in Leopolis, Wisconsin, the daughter of the late John and Marie Thurner. Ruth resided in Appleton since 1932, and was married to Laverne Halverson on April 3, 1937. He preceded her in death on March 21, 2000. Ruth was a longtime and faithful member of Zion Lutheran Church in Appleton. She was employed at Kresge's 5 & 10 for thirty-six years, retiring in 1978. Ruth was a very caring and loving wife, mother, grandmother, and great-grandmother. She was a fantastic cook and a meticulous housekeeper. In her younger years, she loved to go dancing with her husband. In her later years, she enjoyed watching Lawrence Welk on television and listening to Danny O'Donnell recordings. Ruth also enjoyed traveling with friends and family. One of her favorite places to go was Branson, Missouri. She loved watching the Packers and Badgers play football. The only time she attended a football game in person was a special trip to see the Badger football team play. That trip was one of her favorites. Ruth took her one and only airplane ride to Las Vegas with her daughter Ardis, and son-in-law Bill.

She is survived by her daughter: Ardis (Bill) Brandt of Appleton; two grandsons: David Brandt of Winneconne and Robert Brandt of Neenah; a great-grandson: Brandon (Sam) Brandt. She is further survived by her sisters-in-law: Gloria Thurner of Neenah and Gloria Thurner of Antigo. There are also many nieces, nephews, other relatives, and friends. Ruth was preceded in death by her parents, her husband, her brothers: John, Bill, Frank, Max, Joe, Nick, Harold and George; and sisters: Mary Eichinger, Caroline Nichols, Theresa Sherman, Ann Prickett, Barbara Swinford, and Adeline Bayer.

A funeral service for Ruth will be held at 11:00 AM on Monday, April 7, 2014, at Zion Lutheran Church, 912 N. Oneida Street in Appleton, with Pastor Lloyd Luedeman officiating. Interment will follow at Highland Memorial Park. Friends may call at the church on Monday from 9:00 AM until the time of the service. Online condolences may be offered at www.wichmannfargo.com.

Ruth's family would like to extend a heartfelt thank you to the nurses and staff at Brewster Village for their wonderful care and compassion. We will never forget your kindness.