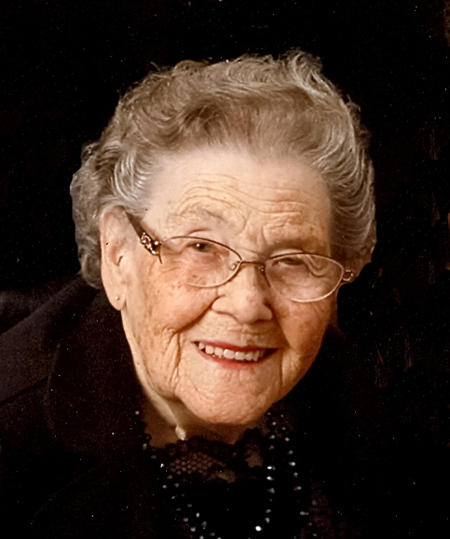 Ruth Kieffer, 97, passed away on Tuesday, January 7, 2014 at home surrounded by her family. Ruth was born on November 13, 1916 to Charles and Antoinette Wagner. On June 8, 1943 she was united in marriage to Elmer Kieffer at Holy Cross Church. Ruth was a loving and caring mother who was the best cook and could always prepare a wonderful meal. She was also good at canning, crocheting, playing cards, talking on the phone to her sister, giving perms and doing hair of all the neighbors. Ruth was very family oriented and loved her Lord and family very much, and the time they spent together will always be treasured.

The funeral liturgy will be held on Saturday, January 11, 2014 at 10:00 AM at HOLY CROSS CATHOLIC CHURCH, 309 Desnoyer St. A time of visitation will be held on Saturday from 8:30 AM until the time of the service at the church. Interment will be in the Holy Cross Cemetery. Online condolences may be expressed at www.wichmannfargo.com. The family would like to thank Carla and Ray for everything they have done for Mom for the last years and to Heartland Hospice and her good friend Bea Johnson for always being there.