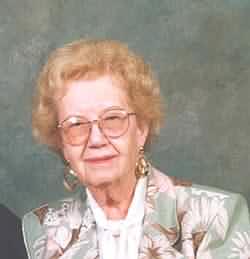 Age 80, died Sunday, December 30, 2001, at Appleton Medical Center. Ruth was born on July 26, 1921, in Norman, Oklahoma, to the late Ray and Nellie (Soloman) Banning. During WWII Ruth worked in the chief dispatcher‚Äôs office of the Denver Rio Grande Western Railroad in Grand Junction, Colorado where she met her husband. Lowell (Ted) and Ruth were married on July 6, 1947, in Grand Junction, Colorado. They moved to Hillsdale Michigan, in 1948, where she worked as a legal secretary while Ted attended Hillsdale College. They then moved to Ann Arbor, Michigan, where she worked as a secretary in the detective bureau of the Ann Arbor Police Department. In 1951 they moved to Dayton, Ohio, and lived there until 1973 when they moved to Appleton. Ruth was a loving wife, mother, and grandmother who was dedicated to her family. She enjoyed reading, traveling, and was a volunteer at Appleton Medical Center and several children‚Äôs organizations in Dayton, Ohio. She was an active member of P.E.O (of Appleton) and was a long-time member of First United Methodist Church.

Survivors include her husband of 54 years, Lowell; her daughter, Kathy (Don) Oakland, Wausau; her son Chris (Sylvia) Schleicher, Appleton; her grandchildren, Sarah and Melissa Oakland, Tera Schleicher (fiancee Ben Ipsen), Brian and Brenda Baldock; and her sister, Hazel Porter, Conway, Missouri. She was preceded in death by her sister, Naomi Underwood and her brothers, Ralph and Basil Banning.

Funeral services will be at 11:00 a.m. on Thursday, January 3, 2002, at WICHMANN FUNERAL HOME, Appleton, with Rev. Joyce Rich officiating. Interment will be in Highland Memorial Park, Appleton. Friends may call at the Wichmann Funeral Home on Thursday from 9:30 a.m. until the time of services. A memorial has been established to benefit the Martha Seikman Cancer Center at Appleton Medical Center.