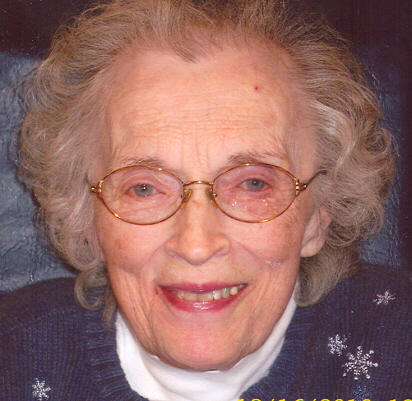 Her greatest pleasures in life came from being a loving wife and mother. Working closely together, Earl & Ruth drew up the floor plans to the home they lived in from August of 1968 until the end of August 2007. The Laatschs were members of Grace Lutheran Church and more recently Our Saviour's Lutheran Church, both in Appleton. Ruth was the first member of Grace Lutheran's Prayer Chain which she headed up for a number of years. A true hostess, Ruth enjoyed cooking and baking for family and friends, and for parties at their home. She enjoyed traveling to visit her children and going up north. She was also an excellent seamstress.

She was preceded in death by her parents, Roy and Viola Petersen, her husband Earl, her brother Richard, and brother-in-law and sister-in-law, Lester and Isabel Laatsch.

The funeral service will be at 7:00 p.m. on Monday, March 14, 2011, at OUR SAVIOUR'S LUTHERAN CHURCH, 3009 N. Meade St., Appleton, with Rev. Kurt Hoffmann officiating. Friends will be received at the church on Monday from 4:00 p.m. until the time of the service. A private family committal service will be at Appleton Highland Memorial Park.

In lieu of flowers, memorials in her name may be sent to Alzheimer's Association of Greater Wisconsin, 2900 Curry Lane, Suite A, Green Bay, WI 54311.

Ruth's family would like to extend a special thank you to Dr. Thomas Schelble and his nurse, Elaine, the compassionate and dedicated caregivers at Heartwood Homes Senior Living, Tracy Ziegler-Harder and her staff at Heartland Hospice, and Rev. James Seim with Our Saviour's Lutheran Church.