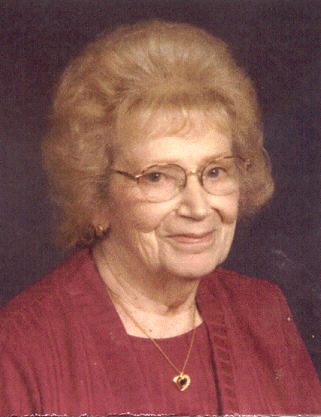 Ruth Huss, Age 91, passed away on Thursday, May 22, 2008 at Parkside Care Center in Little Chute. Ruth was born near Black Creek on March 1, 1917, daughter of the late Peter and Margaret (Gonnering) Moser. On August 11, 1936, she married Norbert T. Huss; he preceded her in death in 1989. Ruth was a longtime and faithful member of St. Nicholas Catholic Church in Freedom and served as a member of the Christian Mothers Society. She was a member of the Freedom Golden Agers. Ruth liked sewing, playing cards, and traveling, especially to Branson, MO and Tennessee.

The funeral liturgy will be at 12:00 p.m. on Tuesday, May 27, 2008 at ST. NICHOLAS CATHOLIC CHURCH, Freedom, with Fr. Dave Hoffman officiating. Friends will be received at the church on Tuesday from 10:00 a.m. until the time of the liturgy. Burial will be in St. Nicholas Cemetery.

The family extends a special thank you to the caring staff at Parkside Care Center.