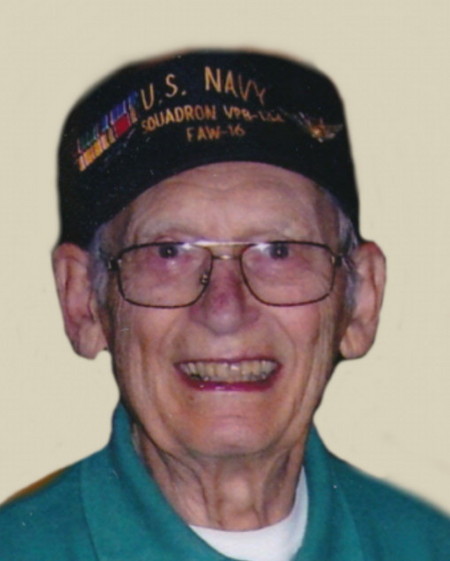 We lost a quiet, kind, gentle man in the evening of September 4th, 2013 at the age of 92. Russell Howard Beck, Sr. was born in Milwaukee, on August 16, 1921 to Harry and Lillian (Faust) Beck. Upon graduation from Riverside High School in 1939, he attended the Milwaukee Business College and then was employed by the Milwaukee Gas Light Company. In August of 1942, Russ enlisted in the Navy at Great Lakes Naval Station. He was very proud of his service during World War II in Naval Aviation in the Pacific Theatre where he reached the rank of AOM First Class. He was discharged from Great Lakes in October of 1945. Russ then attended Lawrence College for a short time where he was an affiliate of Phi Kappa Tau Fraternity.
Russell married Annabel Anderson on April 2, 1945 at St. James Episcopal Church in Oakland, California. Together they raised six children in various Wisconsin cities and finally settled in Appleton, and as he stated, “came full circle.” Russell held a number of jobs in the wood and paper industries. His final place of employment was at Great Northern Corporation as a Quality Control Technician. He retired in 1987, after 25 years of employment, to care for his disabled wife. Annabel died in November of 1991.
On February 14, 1994, Russ married Kathleen (VanDeHey) Thiel whom he met through the Rainbows at Mary's Place. They enjoyed many vacations together, and had a wonderful circle of family and friends. Kathy passed away in February of 2008 after a lengthy illness.
Russell was a very spiritual man, attending All Saints Episcopal Church with his wife Annabel and their children and later St. Thomas More with his wife Kathy. He enjoyed hunting and fishing with his sons and grandsons, especially turkey hunting. He loved the Brewers, Packers and the Bucks and could be found watching the games with fellow “Oakridge Boys” at the nursing home. Thank you, Don, for bringing laughter back into our lives! Bingo night was also a big hit in the “AW”. Prior to his illness, Russ enjoyed paint-by-number and completed several beautiful works of art. We will cherish them forever. He loved the sunshine and could be found most nice days on the patio visiting, or just napping.
A very important day in Russell's life was when he boarded the plane in July of 2010 and participated in the American Legion/Old Glory Honor Flight, the Veterans' Tour of Honor to Washington D.C. This was a very emotional journey for him, and he spoke of it often. We are so grateful that he was able to experience this wonderful opportunity.
Russell is survived by his four daughters; Donna (Phillip) Gross and Barbara (Jerry) Schimmelpfenning of Appleton; Charlene (Larry) Helminen of Tucson, Arizona and Susan (Michael) Henderson of Wabeno; his two sons; Russell, Jr. (Susan) of Boscobel and John (Janice) of Waunakee. Also surviving are his brother, Jack (Natalie) Beck of Downers Grove, Illinois; two nieces, 15 grandchildren, 17 great-grandchildren with number 18 due shortly; Kathy's children: Robert (Rhoda) Thiel, Gary (Bonnie) Thiel, Mary (Jim) Roberts, Dawn (Kurt) Glaser and many relatives and friends of the Thiel family.
The funeral service for Russell will be held at 11:00 am on Monday, September 9, 2013 at Highland Memorial
Park – Star of Hope Chapel, 3131 N. Richmond Street in Appleton. Fr. Gerald Falk will be officiating. Entombment will take place at Highland Memorial Park. The family will receive relatives and friends on Monday from 9:30 am until the time of service. In lieu of flowers, memorials to the Johnston-Blessman Post #38, American Legion or Northeast Wisconsin Old Glory Honor Flight are appreciated. Online condolences can be offered at www.wichmannfargo.com.
We thank you, Dad, for being a hard worker, a caregiver to our mothers, a friend to many, and most importantly, our father. We will always love you and we will always miss you. Your struggles are over and it's time for you to rest in peace. Our heartfelt thanks to the staff at Oakridge Gardens, where Russell made so many friends, and to his special friend, Laura of Ridgeview Highlands, where he lived prior to his stay at the nursing center.