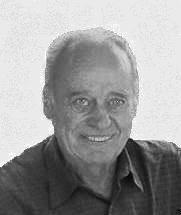 Rudolf E. Ottersen of Stevens Point passed away on Wednesday April 30 at Theda Clark Memorial Hospital in Neenah after a brief illness. Rudy was born on
Friday, August 13, 1930 in West Salem, Wisconsin the son of Rudolf and Ruth Ottersen. He resided most of his early life in Fargo, North Dakota graduating
from Fargo High School. During that time he earned Boy Scout's Eagle Scout rank and the Pro Deo et Patri award. He went on to graduate from Princeton University where he was a member of the Tigertones cappela singing group. He graduated with a degree in history and married his wife Barbara on July 18, 1952. The couple resided in Alameda, California while Rudy completed his service as an officer in the United States Coast Guard. Moving to Stevens Point, Wisconsin to become general manager of the Campbell Department Store, Rudy became an active and committed member of the local business community. During his career in retail, agriculture and real estate development he held numerous positions of leadership in the Stevens Point community. He served as director of the Stevens Point Chamber of Commerce, Stevens Point Country Club and drive chairman of the local United Way. He also served as president of the Stevens Point Board of Realtors and MLS.Rudy enjoyed tennis, golf, curling and hunting. His memberships included the Kiwanis Club and Rotary Club.

The family will be celebrating and remembering Rudy's life in private commemorations.