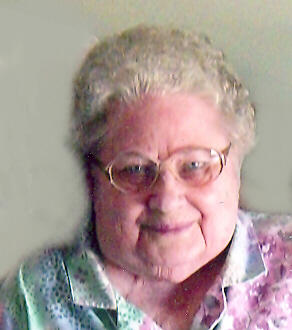 Age 90, passed away peacefully to her Heavenly home on Friday morning, October 31, 2008. Ruby was born on February 25, 1918 in East Bloomfield, Wisconsin to John and Elsie (Oestreich) Prellwitz. She was a member of St. John's Evangelical Lutheran Church, where she was baptized, confirmed and went to school. She lived with her parents on the farm until age 19 when she moved to Appleton, Wisconsin. In Appleton, she was employed by St. Elizabeth Hospital. In 1942, she married Clarence “Jack” Winter. She went to live with her husband in Neenah, Wisconsin, where he was employed by the Neenah Foundry Co.

In 1947, her husband Clarence was killed in a car accident. Ruby and her son Ronald moved back to Appleton where Ruby continued working at St. Elizabeth Hospital for 31 years; 21 of those years were spent on the night shift in the Pediatric Department. On June 9, 1950 she married Laurence Bussian at Riverview Evangelical Lutheran Church in Appleton, Wisconsin.

Besides her work, she enjoyed gardening, growing flowers, and working with the soil. She also enjoyed crocheting, sewing, baking, canning, and spending time with her grandchildren, especially Adam and Matthew Bruss with whom she spent a lot of time.

Ruby is survived by a son: Pastor Ronald Winter and his wife Lyless of Schofield, WI; daughter: Bonnie Bruss and her husband Glen of Menasha, WI; daughter: Julie Adkins and her husband John of Corinth, TX; and 9 grandchildren: Adam (Jenny) and Matthew (fiancée Amanda) Bruss, Anna (Mitchell) Horton, Lucas (Tessa) and Maria Winter, and also Timothy, Shannon, Laura, and David Colwill. She was preceded in death by her parents; her first husband, Clarence Winter; her second husband, Laurence Bussian; and one daughter, Debbie. She was a faithful member of Riverview Evangelical Lutheran Church for 58 years.

Funeral services for Ruby will be held at 11:00 A.M. on Monday, November 3, 2008 at Riverview Evangelical Lutheran Church (136 West Seymour Street) with Rev. Dennis W. Belter officiating. Friends will be received at the church from 9:30 A.M. until the time of the service. Interment will be held in Oak Hill Cemetery, Neenah. In lieu of flowers, a memorial fund is being established. “Blessed are the dead who die in the Lord…”

The family would like to thank the staffs of Crestwood Senior Living and Heartland Hospice for their exceptional care and support.