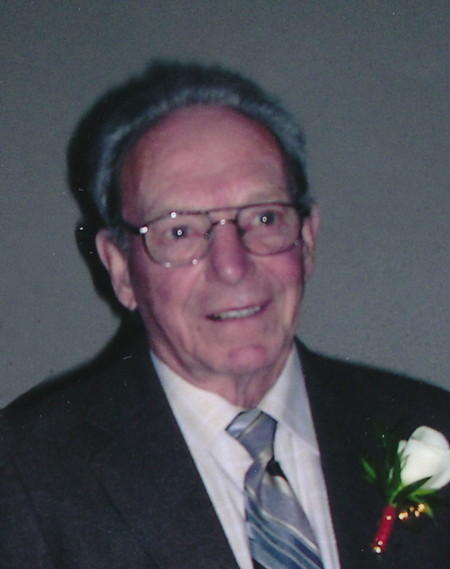 Roy Thomson, age 78, of Neenah, passed away on Sunday, February 26, 2012 surrounded by his family. He was born on December 22, 1933 in Little Chute, the son of the late Alfred and Ruth (Klasen) Thomson. He served in the U.S. Army during the Korean War. On February 14, 1957, Roy married Darlene “Smick” Griesbach at St. Therese Catholic Church in Appleton. He owned and operated numerous gas stations and auto repair shops in Neenah, later working for his son at Randall's Auto Haus in Menasha. Roy also operated the V.F.W. Bar in Menasha.

He was a charter member of St. Gabriel Parish in Neenah. Roy was a life member of the V.F.W. Post 2126 of Menasha and past Quartermaster for many years. He was a kind and gentle man, who liked to work, and enjoyed volunteering and helping others. Roy was a member of the Neenah/Menasha Breakfast Optimist Club.
Roy liked woodworking, snowmobiling, and most importantly spending time with his family, especially at the cottage in Townsend. While he lived in Townsend, he was a member of the American Legion Post 44 in Wabeno. He had a great love for his country and a deep respect for its flag.

The funeral liturgy for Roy will be held at 4:00 pm on Wednesday, February 29, 2012 at ST. GABRIEL OF ARCHANGEL PARISH, 900 Geiger Street, Neenah. Fr. Richard Allen will be officiating. Friends will be received at the church on Wednesday from 2:00 pm until the time of mass. In lieu of flowers, a memorial fund has been established in his name.