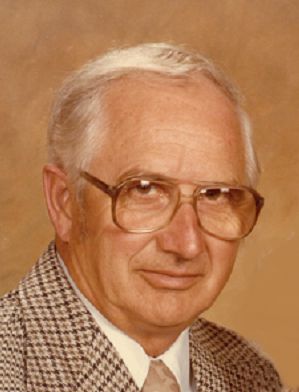 For seventy years, Roy Wentzel had never missed his beloved Genevieve’s birthday. After her passing on November 1, 2017, he vowed not to miss her next birthday, and on May 2, 2018 (Gen’s birthday) Jesus called Roy home to heaven and reunited him with his wife of seven decades.

Roy Davis Wentzel was born in the Town of Wolf River on November 16, 1921, son of the late George Wentzel and Blodwin (Davis) Wentzel. He was a graduate of Omro High School, the University of Wisconsin – Oshkosh, and held a Master’s Degree. From 1942 until 1945, he served in the United States Army under General Patton, and was highly decorated. He earned a Victory Medal, American Theatre Ribbon, European/African/ Middle Eastern Theater Ribbon, four bronze battle stars, two Overseas Service Bars, a Good Conduct Medal, and a Bronze Star Medal. Roy was a member of Kaukauna’s American Legion Post #41. Most will remember Roy for being a high school chemistry teacher for many years at both Kaukauna and Brillion.

His free time found him fishing, hunting, working on his vegetable garden, ballroom dancing, and skiing. He also had a passion for photography.

The funeral liturgy for Roy will be held at 11:00 AM on Tuesday, May 8, 2018, at HOLY CROSS CATHOLIC CHURCH, 309 Desnoyer Street in Kaukauna, with Fr. Tom Pomeroy officiating. Full military honors will follow the service. Friends and family are invited to gather at the church on Tuesday morning from 9:00 AM until the time of the service. Roy and Genevieve will be laid to rest together this spring at Holy Cross Cemetery.

In lieu of flowers, contributions may be made to the Roy D. Wentzel Scholarship Fund.

The family would like to extend their sincere gratitude to everyone at St. Paul Elder Services and St. Paul Hospice for the love, care, and compassion that was shown to our entire family. We will never forget your kindness.