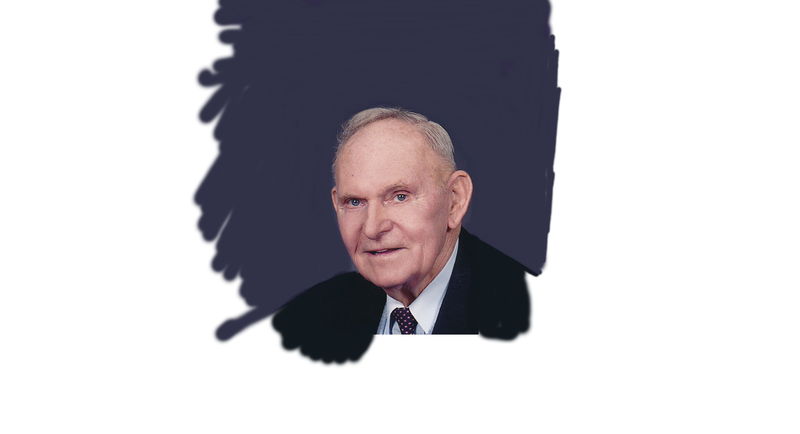 Ross graduated from High School in 1943 and wanted to become a Chemical Engineer. He attended the University of Wisconsin ‚Äì Madison for a short time before he was drafted into the service during World War II. Ross entered the service at Fort Sheridan, Illinois on February 28, 1944. He was assigned to the 94th Chemical Warfare Battalion. The unit participated in the Rhineland and Central Europe campaigns. He served 2 ¬Ω years in the Army and was discharged on April 22, 1946. His unit followed the Rhine River beyond Regensburg, Germany into Czechoslovakia. Ross, being a World War II Veteran, was so happy he had a chance to see the beautiful new World War II Memorial with his family in Washington, D.C. in 2004.

Ross graduated from the University of Missouri School of Mines and Metallurgy in Rolla, Missouri in 1951 with a B.S. Degree in Mining Engineering. He took a Government Service Exam and got his first job for the government as a Mining Engineer in Duluth, Minnesota. He then transferred to the Engineering Dept. of the Army Corps of Engineers in Milwaukee as a Civil Engineer. In 1955, Ross accepted the Engineering Position for the Army Corps of Engineers in Appleton. His first job was to inspect the construction of the new dam in Menasha.

In 1959, Ross became the Project Engineer in charge of all the locks and dams along the Fox River. He received many awards while working in Appleton. The old office on Oneida Street in Appleton was later moved to Appleton Street in Kaukauna. Ross helped with the design of the building and a lot of the construction of the new building was done by Ross's repair crew. The year 1975 was a special year for Ross. The chief of the Army Corps of Engineers in the Chicago District presented Ross the Meritorious Civilian Service Award. It is the highest award that the Chief of Engineers can bestow on a civilian employee of the Corps. He received this award due to his superior professional ability and leadership in the Fox River Office. Ross retired from the Corps in 1981. A few years later the Government turned over the operation of the locks to the State of Wisconsin. Ross became involved with the Fox River Management Commission and for a few years, ran the lock system for the State of Wisconsin during the boating season.

Ross Plainse was one of the first four Little League Coaches when they opened up Kiwanis Park in Appleton. Ross's first team was called the Fox River Team. He served several years as Little League Coach at Kiwanis during the years his sons were playing. The teams at that park did quite well as the members of the All-Star Teams won several State Championship Titles. Ross also coached a Babe Ruth team for two years. Not only was Ross involved in baseball, but also in Boy Scouts. Scouting was new in Greenville at that time. There were a few Cub Scout Dens, but no Webelo Den which prepares the boys to become a Boy Scout. Ross began the first Webelo Den in Greenville. He held the meeting in his basement at the house and really enjoyed working with the boys. In 1971, Ross built a cottage for the family on Bear Lake, outside of Lakewood, and spent as much time as he could at the cottage with his family.
The funeral service for Ross will be held at 12:00 Noon on Friday, January 25, 2013 at Faith Lutheran Church, 601 East Glendale Avenue in Appleton. Rev. James Wiebel will be officiating. Committal services with full military honors will take place at Riverside Cemetery following the service. A visitation will be held Friday at the church from 10:00 am until the time of service. In lieu of flowers, memorials to the American Diabetes Association are appreciated. Online condolences can be expressed at www.wichmannfargo.com

The family would like to thank the nurses and support staff at Appleton Medical Center and everyone at Cherry Meadows, for the excellent care and compassion shown to Ross and our family.