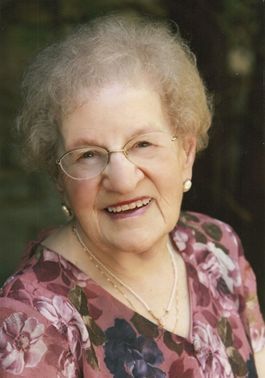 She has 28 grandchildren and 25 great-grandchildren. Rosemary was preceded in death by her husband Jim; a son Bill; a daughter-in-law Connie; a son-in-law Richard Tibbals; and a granddaughter Molly. In addition, all her brothers & sisters have predeceased her.

In her spare time, Rosemary belonged to the Monte Alverno Retreat House Guild, the St Joe's Choir for 20 years, Secular Franciscans for 65 years and the prayer shawl ministry. She was a Eucharistic Minister, Promoter of the Miraculous Medal, volunteer at St Joe's Food Pantry, charter member of the Xavier Food Fair and she attended innumerable school events for her children and grandchildren.

Rosemary loved family get-togethers and “traditions”. She didn't need reunions because her kids got together for Christmas, Memorial Day weekend, 4th of July, Peninsula State Park in late July, Labor Day “at the farm” and Thanksgiving. She enjoyed traveling with her husband around the U.S., spending winters in Gulf Shores, but always returned to their beloved Wisconsin. They made several trips to Europe and her favorite was visiting her ancestral hometown of Zweisel, Germany. She continued to travel in her later years to Rome and Alaska. She also fulfilled a lifelong dream when she visited the Holy Land about 7 years ago. In the early years of kids in diapers everywhere, she still valued a yearly “family vacation” whether it was a cottage in Northern Wisconsin or a family trip with 8 kids to Yellowstone National Park!

She had a great sense of humor and loved being with her grandchildren and great-grandchildren. She taught them to play “Kings' Corners” and taught the kids to be gracious winners and losers.

Rose sent cards to every single family member, containing a crispy new bill, on Birthdays, Anniversaries and Valentine's Day. Her calendar was a thing to behold!

She was a devout Catholic and inspired those around her to live a life of faith. An inveterate lighter of vigil lights, she had a jar of intentions on her kitchen counter and whenever the family had an issue, health or otherwise, they started by asking Mom for her prayers. She seemed to have a direct line!

She was a wonderful wife, mother, grandmother and great-grandmother, and role model for her entire clan that numbers nearly 90! Her life was a testimony to the power of prayer.

The family would like to thank the caring staff of Brewster Village who helped so much during our Mom's last days.