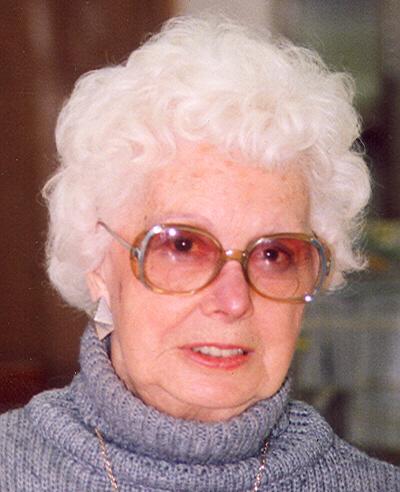 I did not expect to be able to love you so long, but what the Lord does is well done. I left you all with love in my heart.

Rose M. Laux, age 98, of Appleton, died on January 12, 2006, at St. Elizabeth Hospital. Rose was born on February 9, 1907, in Wrightstown, to the late James and Mary (Van Enkenvort) Garrity. Rose married Gordon W. Laux May 13, 1925; he preceded her in death on September 8, 1984. She was a loving wife, mother, grandmother and great grandmother. Rose enjoyed dancing, card playing and especially the time she spent with her family. She graduated from Normal School and was teacher at Garrity School in Wrightstown. Rose was also a long-time volunteer at St. Vincent de Paul and St. Piux X parish. Survivors include her children, Randolph (Emily) Laux, Appleton; Donald (Yoko) Laux, Newark, Texas; Bonita Damro, Little Chute; Gordon A. (Lois) Laux, Mexico; David E. (Judy) Menasha; Patrick (Carmen) Laux, Arizona; Joseph (Pamela) Laux, Florida; Mary (Tom) Murphy, Freedom; Kathy (Larry) Fondow, Appleton; and John Laux, Appleton; her brothers, Albert Garrity, Florida, and Irvin Garrity, Green Bay; her 34 grandchildren, 66 great grandchildren and 16 great great grandchildren; and her special friend Arthur Hofkens, Appleton. She was preceded in death by her brothers George Garrity and John Garrity, and her sisters, Alice Hooymen, Ethel Hagens and Marie Garrity; her son-in-law, Clifford Damro; and her grandsons, Mark Damro and James R. Laux. The Funeral Liturgy will be at 11:30 a.m. on Saturday, January 14, 2006 at ST. PIUS CATHOLIC CHURCH, 500 West Marquette Street, Appleton, with Fr. Brian Belongia officiating. Friends may call directly at the church on Saturday from 10:00 a.m. until the time of services. Interment will be in St. Joseph Cemetery, Appleton. A memorial has been established in her name.