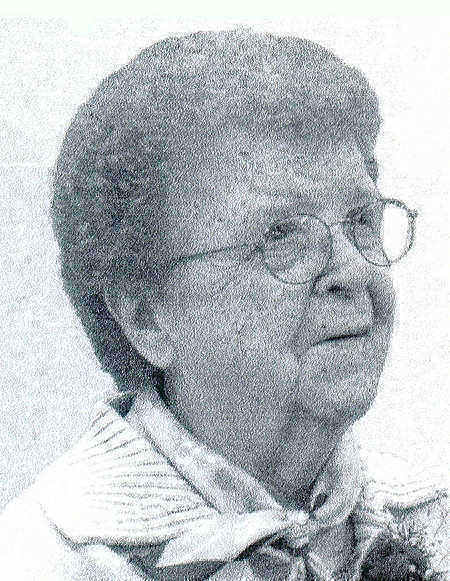 Rose Johanna Mueller, age 98, of Appleton, died peacefully in her home surrounded by her beloved and loving family on Sunday morning, August 7, 2011. Rose was born at home on the family farm in Mackville on March 27, 1913, the third oldest of seven children of the late Andrew and Catherine (Klein) Gengler. She married Hubert “Butch” Mueller at St. Edward Catholic Church in Mackville on February 26, 1938; he preceded her in death. Rose lived most of her adult life in Appleton. In Rose's younger days she loved to dance and would travel the countryside with her sisters, brother and friends to the ballrooms and barn dances. For recreation she would take her children and later her grandchildren for walks. She liked to go camping with her family and she was also an avid reader. Above all else, she loved her children and grandchildren. Rose is survived by her children: Janice (Al) Fredrickson, Merrill; Gerald Mueller, Elmore City, Oklahoma; Charles Mueller, Appleton; Jeanne (Thomas) Thomson, Kimberly; Ronald (Ann) Mueller, Appleton; Sandra (Danny) Witthuhn, Appleton; Cheryl (TJ) Jenkins, Phoenix, Arizona; and Steven (Bonnie) Mueller, Appleton She is further survived by her grandchildren, Debbie Fredrickson, Bill Fredrickson, Kristopher Mueller, Nicholas Mueller, Sandra (Caleb) Emerich, Robert (Gina) Schwanke, Mark Mueller, Matthew (Megan) Mueller, Luke Mueller, Pamela Witthuhn, Betsy Witthuhn, Emily (Tom) Parry, Thomas (Theresa) Jenkins, Justin (Erin) Jenkins, Brandyn (Brandy) Jenkins, Nathan Jenkins, Travis Mueller and Steven Mueller. Rose had 18 great grandchildren. She was preceded in death by her grandson, Scott Fredrickson; her brothers-in-law, Jack Roeland and Merle Schommer; her brother Lawrence and sister-in-law Georgine Gengler; her sister Marcella and brother-in-law Robert Schmidt; and her sister, Genevieve Gengler. The Funeral Liturgy will be at 11:00 a.m. on Saturday, August 13, 2011, at ST. THERESE CATHOLIC CHURCH, Morrison Street at Wisconsin Avenue, Appleton, with Fr. William Hoffman officiating. Friends may call directly at the church on Saturday from 10:00 a.m. until the time of services. Interment will be in Holy Name Cemetery, Kimberly. The family wishes to thank Affinity Hospice for the tender and compassionate care they have given her. A memorial has been established in Rose's name to benefit the Emergency Shelter of the Fox Valley.