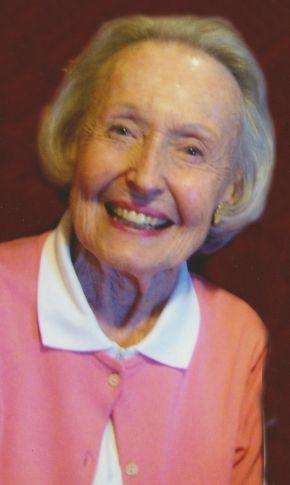 Rose Ann Bleier, age 90, of Appleton, passed away peacefully with family at her side Thursday, February 11, 2016. She was born on November 25, 1925, the daughter of the late Seymour and Rose (Walter) Gmeiner. She attended Appleton High School and graduated in 1943. She continued to Lawrence University graduating in the centennial year of 1947 with a Bachelor's degree. There Rose Ann was president of the Delta Gamma Sorority and continued her education at Layton School of Art and Design.
In June 1949, Rose Ann was married to her high school sweetheart, Raymond “Dutch” Bleier. Together they were blessed with six children and had a loving marriage of sixty-five years.
She worked outside the home at Raymond's of Fox Cities, Earth Resources and catering. However the most important job she ever did was raising her family. Rose Ann was devoted to her family and friends.
Rose Ann loved gardening, time outdoors and rowing her boat. She was involved in the Appleton Yacht Club, King's Daughters and Meals on Wheels. Rose Ann was always very proud of the recognition she received form the Appleton East Parent Athletics Club from 1967-1972 and was awarded the Super Patriot Award.
Rose Ann was an active member at All Saints Episcopal Church. She loved the music and sang in the choir growing up.
She is survived by her six children, Gary (Cheryl) Bleier, Bruce (Jane) Bleier, Craig Bleier (fiancé Sharon Andrew), Mark (Kay) Bleier, Becky (Steve) Schultz and Sue (Don) Sawall and many loving grandchildren and great-grandchildren. Rose Ann is further survived by many nieces, nephews, other relatives and dear friends.
In addition to her parents Rose Ann was preceded in death by her husband, Raymond “Dutch” and her three brothers, George Walter Gmeiner, Seymour Gmeiner Jr. and Dr. James Gmeiner.
The memorial service for Rose Ann will be held on Saturday, February 20, 2016 at 11:30 a.m. at ALL SAINTS EPISCOPAL CHURCH, 100 N. Drew Street in Appleton. The family will receive relatives and friends at the church from 9:30 a.m. until the time of the service. In lieu of flowers, a memorial fund has been established in Rose Ann's name. Online condolences can be expressed at www.wichmannfargo.com.
Rose Ann's family would like to thank the doctors and nurses at Theda Clark Medical Center, the staff at Peabody Manor and ThedaCare at Hospice Residence at Heritage for the excellent care and compassion shown to our family.