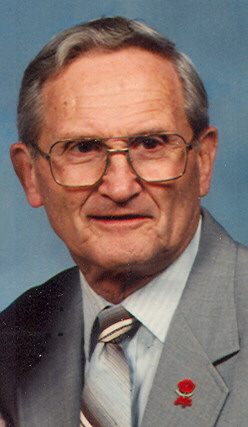 Age 90, passed away at Grand Horizons in Appleton on Sunday, April 5, 2009. Roscoe was born in Hillsboro, WI on February 12, 1919, the son of the late Daniel and Vivian (McHenry) Roberts. He served in the United States Army Air Force from October 1, 1941 until January 2, 1946, serving in India. On May 18, 1946 he married his wife of 62 years, Carol Cowing, in Kansas City, MO. In 1969, he moved to Appleton from Kansas City and worked as a lithographer for Northwestern Colorgraphics in Menasha, retiring in 1986. He was an avid photographer and loved to capture nature, family, and the church community. Roscoe donated much of his time with St. Bernard Catholic Church, St. Vincent de Paul, St. Joe's Food Pantry, and was very active in the Hmong Community, assisting with language and relocation.

The Funeral liturgy will be at 11:00 a.m. on Wednesday, April 8, 2009, at ST. BERNARD CATHOLIC CHURCH, 1617 W. Pine Street, Appleton, with Fr. Dennis Ryan officiating. Friends will be received at the church on Wednesday from 9:00 a.m. until the time of the Mass. Burial will be in St. Mary Cemetery, Appleton.

The family extends a special thank you to the staff at Grand Horizons, Heartland Hospice and Asera Care Hospice, for making him comfortable during his final years.

In lieu of flowers, a memorial fund in Roscoe's name is being established. Donations will be given to Roscoe's favorite charities.

“Thank you for all of the wonderful memories, you will be missed very much.” From your loving wife and family