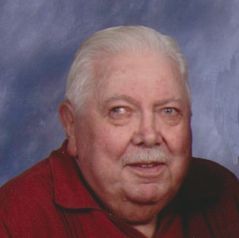 Ronald Dalke, age 82, of Appleton, passed away peacefully at his home on Monday, April 22, 2013. He was born on February 21, 1931, in the Town of Center, the son of the late Martin and Esther (Eimmel) Dalke. Ron served his country during the Korean Conflict. On November 12, 1956, he married Carol Huth at St. Paul Ev. Lutheran Church in Appleton. Ron was a welder at Fox Tractor and then the owner and operator of Ron's Welding Shop in Appleton. He worked on building utility trailers in his spare time. Ron was an avid sports enthusiast, enjoying wrestling, the Badgers, Packers, Brewers, and NASCAR.
Ron is survived by his loving wife of 57 years, Carol Dalke; sister, Lois Young; sisters-in-law: Dar Taylor, Audrey Dalke, and Sylvia Huth; and brother-in-law, Don (Vivian) Huth. He is further survived by nieces, nephews, other relatives, and friends. Ron was preceded in death by his brothers: Monroe Dalke and Vernon Dalke; brothers-in-law: Elton Huth and Paul (Lois) Reihl; and sisters-in-law: Margie (Norbert) Hardy, Lorraine (Wesley) Warnke, and Arlene (Merlin) Wolf.
The funeral service for Ronald will be held at 11:00 a.m. on Thursday, April 25, 2013 at St. John Ev. Lutheran Church, Hwy 47 North in Appleton. Rev. Jeffrey Suhr and Rev. Micah Martin will be officiating. Interment will take place at Riverside Cemetery in Appleton. A time of visitation will be held on Thursday at the church from 9:30 a.m. until the time of service. In lieu of flowers, a memorial fund has been established in his name. Online condolences can be offered at www.wichmannfargo.com.