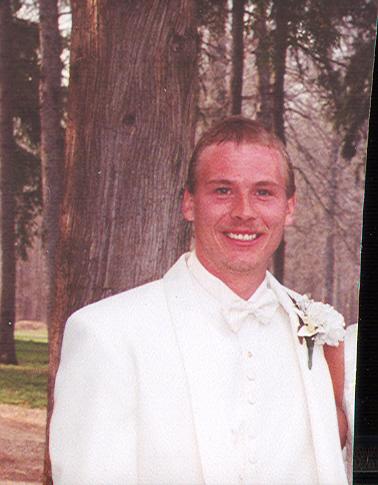 Ronald M. Stueber
‚ÄúSonny‚Äù
Shiocton
Age 33, passed away unexpectedly, due to a car accident on Sunday April 22, 2007. Sonny was born July 8, 1973 in Appleton. He married Tammie Mavis on April 22, 2000 in Black Creek. Sonny was currently employed by Reiter Brothers Concrete. He enjoyed hunting, fishing and spending time with his children and his hunting dogs. He was an avid Packer and Nascar fan and loved Ford trucks. In addition to his wife Tammie, Sonny is survived by his children Levi, Chelsea, Caleb, Tyler, Ian, and Taylor. He is also survived by his father, Ronald (Melissa); his mother, Susan (Gordon) Munger; his brothers and sisters; Tammy (Ken) Woodke, Sandie (Cori) Shearer, Tina Myhill, Scott Stueber, Ashley, and Adam Stueber, his mother and father in law, June and Milton Mavis, and their family, also numerous, aunts, uncles, cousins, nieces, nephews, other relatives and friends. Sonny was preceded in death by his mother, Nancy K. (Salm) Stueber, and his grandparents.
Funeral Services will be held at 6 p.m. on Wednesday April 25, 2007 at the funeral home. Visitation will be from 3 p.m. until the time of services. Burial will be in Highland Memorial Park, Appleton. In lieu of flowers a memorial is being established.