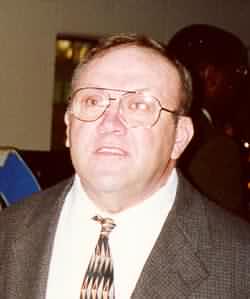 Age 60, died surrounded by his loving family on Tuesday, October 16, 2001. Ronald was born on November 3, 1940 in Appleton, son of the late George and Erma (Thompson) Theyel. Ronald married Beverly Vander Zanden on April 26, 1967, and they have enjoyed over 34 years of marriage. Ronald will be greatly missed by his wife Beverly; his daughter, Karen (Kevin) Freitag, Appleton; his 3 sons, Kevin (Jennifer) Theyel, Little Chute; Keith (Shelly) Theyel, Spokane, Washington; Kurt Theyel, Appleton; his sister, Joyce Romnek, Menasha; 5 grandchildren, Ryan; Joshua; Kelsey; Kaitlyn and Tiffany; mother-in-law, Martha Vander Zanden, Appleton; sister-in-law, Marjorie Theyel, Neenah; and brother-in-law, Jerry Mollen, Seattle, Washington. Ronald was preceded in death by his daughter, Kathleen; his brother, George; 2 sisters, Carol Mollen; Judy Davids; and father-in-law, William Vander Zanden. The Funeral Liturgy will be at 11:00 a.m., on Friday, October 19, 2001, at ST. THOMAS MORE CATHOLIC CHURCH, 1810 North McDonald Street, Appleton, with Fr. Gerald Falk officiating. Friends will be received at the funeral home from 4-8 p.m. on Thursday, October 18, and again at the church on Friday, from 10 a.m. until the time of service. A Prayer Service will be held at the funeral home on Thursday at 7 p.m.