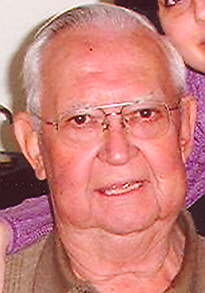 Ronald A. Klofta, formerly of Milwaukee, passed away at home on Wednesday, October 1, 2008 after a valiant fight against pancreatic cancer. He was born in Milwaukee on March 21, 1931, the son of the late Edward and Marian (Gabryszek) Klofta. On September 8, 1951, he married his wife of 57 years, Arlene Gazinski at St. Matthias Catholic Church in Milwaukee. Ron worked at Pat Ryan Ford prior to serving in the United States Air Force from 1951 to 1955 as an administrative supervisor. After the service, Ron worked at various companies as a purchasing agent. He played the trumpet, worked on cars, and brought much laughter to others with his quick wit. He enjoyed having a good time with everyone. Ron was a very humble man and could always be counted on through thick and thin.

The funeral liturgy will be at 11:00 a.m. on Tuesday, October 7, 2008 at ST. THOMAS MORE CATOLIC CHURCH, 1810 N. McDonald St., Appleton, with Fr. Gerald Falk officiating. Friends will be received at the church on Tuesday from 9:00 a.m. until the time of the service. A military honors service will be directly after the mass.

In lieu of flowers, a memorial fund in Ron's name is being established.