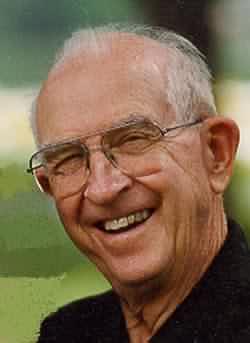 Roland Henry Vogt, born November 23, 1921 in Appleton, Wisconsin to Philipp and Ida Vogt, died Friday, March 29, 2002 at Appleton Medical Center. He was one of 11 children.

Roland, known as ''Rolly'', attended Appleton High School, where he was a ''miler'' on the track team. He broke several city and state records, several of which stood for a number of decades. At the outbreak of
World War II, he and 16 other Appleton natives volunteered for the Army Air Corps with the intention of forming a unit called the ''Flying Foxes''.

Unfit for the Air Corps due to health issues, he went to Lawrence University, but was drafted into the Army. Attaining the rank of Staff Sergeant with the 94th Division, he volunteered to go to England on an unknown mission. He found himself attached to the 1st Division and assigned to land in the first wave on Omaha Beach, D-Day, June 6, 1944. For actions during combat in France and Germany, he was awarded the Silver Star by General George S. Patton. Additionally, he was awarded two Bronze Stars, and was made a Lieutenant through a Battlefield Commission. After the war, he ran for General Patton's Third Army Track Team while waiting to return home. A website has been established at www.unisrv.net/realheroes for historical information regarding his actions and experiences in World War II.

Upon his return, Rolly married his High School sweetheart, Grace Slattery and attended business school, receiving an Associate's degree while working at Badger Mills. His wife died in 1958, leaving him with one son, James Jonathan. In 1961, he married Thelma Krempin of Winnipeg, Canada and fathered a second son, Jeffery Lorne. By this time he was employed at Fox River Tractor Company, eventually becoming the Purchasing Manager. He was also the first Certified Purchasing Manager in the state of Wisconsin, with certification number 1. In 1969, he and his wife adopted their daughter, Hilary Marvene, through Lutheran Social Services. He was active in his church, Zion Evangelical Lutheran Church, as well as being an accomplished tenor and avid golfer.

After Fox River Tractor was purchased by Koerhing Company of England, Rolly retired. He was coaxed out of retirement to work first for Appleton Pattern Company and then C.B. Supply Company before finally retiring fully in 1987.

Until his first heart attack in 1985, he jogged six miles every night. In 1985, he had open-heart surgery at Appleton Medical Center. This surgery was repeated in 2001 to correct new blockages.

In 1993 he and his wife purchased a condominium in Phoenix, Arizona, where they spent their winters, maintaining their home in Appleton for the summer months. In 2001, they sold their house in Appleton in favor of a condominium on the north side of the city.

Rolly was known as a very outgoing and well-loved man who made lifelong friends with people everywhere he went.

In January of 2002, he underwent surgery a third time to implant a pacemaker. He died quietly of complications due to congestive heart failure surrounded by his family and assured by his unshakable faith.

A viewing will be held at Faith Lutheran Church, 601 E. Glendale, Appleton, starting at 9:00am on Tuesday, April 2, 2002 to be followed by a funeral at 10:30am and a Committal with Military Honors at Highland Memorial Park beginning at 1:15pm.

The family requests that, in lieu of flowers, memorials be made to either the Arthur Krempin School of Music at First English Lutheran Church, Appleton, Wisconsin, or the National D-Day Memorial at http://www.dday.org/.
''He fought the good fight.''