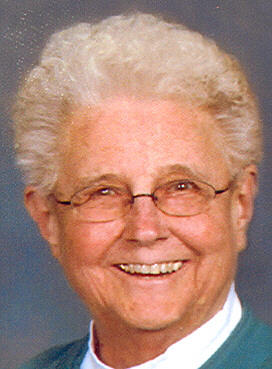 Rojene M. Ratzburg, age 77, of Appleton, passed away Tuesday morning, June 3, 2008. She was born April 14, 1931 to the late Gordon and Mildred (Long) Richardson, in Clintonville and had been an Appleton resident since 1962. Rojene had been employed by FWD in Clintonville and later by Valley Bank of Appleton, retiring in 1993. She made ceramics and did crafts for many years and enjoyed bowling. Rojene was a member of St. Mary Catholic Church, Greenville. She is survived by her husband of 49 years, Lyle D. Ratzburg; two children, Cindy (Todd) Ward, Dale; David (Mary) Ratzburg, Greenville; a sister, Pat Mellin, Marion; two half-brothers, Tom (Brenda) Richardson, Mequon; Jim (Eileen) Richardson, Merrill; nieces, nephews other relatives and friends; and a special niece, Connie (Tim) Beyersdorf and her children, Tailyn and Tyler, Marion. The funeral liturgy for Rojene will be held at 11:00 am, Friday, June 6, 2008, at ST. MARY of the IMMACULATE CONCEPTION CATHOLIC CHURCH, N2385 Municipal Drive, Greenville, with Father Justin Werner officiating. Burial will be in Appleton Highland Memorial Park. Friends may call at the church on Friday from 10:00 am, until the time of the mass. In lieu of flowers a memorial fund is being established.

The family would like to thank Evie O'Donahue and Sister Ames for their many kindnesses.
Wichmann Funeral Home
537 N. Superior Street
Appleton 739-1231
www.wichmannfargo.com