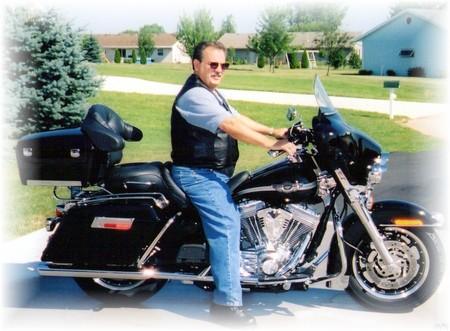 Roger Dale Thompson, age 57, of Greenville, passed away on Saturday, January 15, 2011, at home surrounded by his family after a courageous battle with cancer. Roger was born on September 9, 1953 in St. Louis, Missouri, and later adopted by the late Samuel and Ruth (Dillinger) Thompson. He graduated from Central High School in St. Louis in 1971, and was married to Terry Thompson in 1973. Roger worked in the auto industry for 27 years. He enjoyed being outdoors, golf, fishing, hunting, and shooting trap. Aside from his great love of Harley Davidson motorcycles, he had a passion for remodeling with his son-in-law Brian, Roger also had a great love for his family, especially his grandchildren.
Roger is survived by his wife of 37 years, Terry, Greenville; two daughters, Aimee (Rico) Love, Kansas City, KS, and Kelly Dale (Brian) Kolasinski, Greenville; five grandchildren, Brooke Dale, Kimberly, and Brea Kolasinski, and Neosho and Kaylee Love; one sister, Judy LaRose; and one brother-in-law, Rudy Lesch.
A memorial service for Roger will be held at 1:00 p.m. on Friday, January 21, 2011, at WICHMANN FUNERAL HOME, with Rev. Tim Albrecht officiating. Friends may call at the funeral home on Friday from 10:00 a.m. until the time of the service. The family would like to extend a sincere thank you to the St. Elizabeth Hospital Cancer Center, the Madison Center Oncology Department, and Affinity Hospice for their care, compassion, and support. They would also like to thank the Caring Bridge website for their page dedicated to Roger's story.