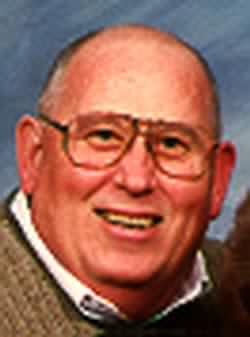 Roger Allen Behnke
Age 58, passed away peacefully with his family by his side,on Saturday, October 19, 2002 at Cherry Meadows Hospice, after a courageous battle with cancer. Roger was born October 21, 1943 in Green Bay, WI to John and Anita (Biedenbender) Behnke. He married Marlys Holland on June 21, 1969 at First Lutheran Church in Butterfield, MN. Roger graduated from Hilbert High School in 1961 and worked with his father on the family's dairy farm for several years after graduation. He obtained an Associate Degree in Accounting from Fox Valley Technical Institute in 1975, and was most recently employed as a bookkeeper at Ace Hardware in Appleton. He was also a member of Faith Lutheran Church.
Roger most cherished his family and coached all of his children in their various youth baseball and softball league's. For many years he enjoyed life as an avid golfer and bowler, but his fondest times were those spent with his six grandchildren.
Roger is survived by his wife, Marlys of 33 years, his three children: Sheri (Greg) Chronis, Greenville, WI, Scott (Kaytie) Behnke, Aurora, IL, Amy Behnke, Appleton, WI; six grandchildren: Zachary, Maxwell, Samuel and Elizabeth Behnke and Trevor and Bryce Chronis. His mother: Anita Behnke, Hilbert; brother Glenn (Ronell) Behnke, Appleton; three sisters: Linda (Gary) Streck, Brillion, Beulah Behnke, Appleton, and Coreen Behnke, Hilbert. His mother-in-law Hertha Holland, Butterfield, MN; brothers-in-law: Orville (Muriel) Holland, Minneapolis, MN, Lowell (Lynda) Holland, Apple Valley, MN, Bruce (Carol) Holland, Mankato, MN; and many nieces, nephews, aunts, uncles, cousins, friends and neighbors. He was preceded in death by his father, John W. Behnke, father-in-law Leonard Holland and a nephew, Andrew Holland.
A Funeral Service will be held on Wednesday, October 23, 2002 at Faith Lutheran Church (601 E. Glendale Ave.) at 11:00 AM with Reverend Daniel Thews officiating. Visitation will be on Tuesday, October 22, 2002 from 4 PM until 8 PM at the funeral home; and also one hour prior to the service at church. Interment will take place at Highland Memorial Park, Appleton. A memorial fund is being established in his name.
The family would like to extend a special thank you to Theda Care Hospice and the staff at Cherry Meadows for their kind and compassionate care.
Your strength inspired us and your smile we admired. We will miss you–Your Family.