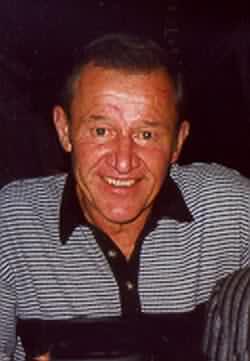 Age 62, died Wednesday morning, August 22, 2001, as the result of an automobile accident. He was born January 6, 1939, to Otto K. and Joyous M. (Peranteau) Rosenfeldt, in Oconto, where he graduated from high school. Chico served in the U. S. Navy from 1958 – 1962, during the Cuban Crisis. He had been employed by Miller Electric for 29 years retiring in 1994. Chico enjoyed the Packers, hunting, meeting his friends at the local pub and doing the ''Chico Shuffle''. He was a member of the Big Falls Lions Club. Survivors include his wife, Jean A. (Kehl) Rosenfeldt, to whom he had been married for 6 years; a son Scott Rosenfeldt, Little Chute; a daughter, Nicole Schmitz and her fianc√© Phillip Lehl, Appleton; his mother, Joyous M. (Peranteau) Rosenfeldt, Neenah; four grandchildren, Alex and Taylor Rosenfeldt, Haley and Madeline Schmitz; two step-daughters, Tina Van Handel, Appleton; Tara (Brian) Meyer, Menasha; five step-grandchildren, Christina, Jada and Javin Moore, Tyler and Brody Meyer; two sisters and a brother-in-law, Nancy and Al Volpintesta, Appleton; Karla Rosenfeldt, Appleton; a special sister and brother-in-law, Jane and Pat Van Zummeren, Menasha; a brother-in-law, Robert Nitz; nieces and nephews. He was preceded in death by his father, Otto K. Rosenfeldt. A memorial service will be held at the funeral home at 11:00 am, Saturday, August 25, 2001, with Deacon Pete Reinl officiating. Friends may call at the funeral home on Saturday from 9:00 am until the time of the service. In lieu of flowers a memorial fund is being established.