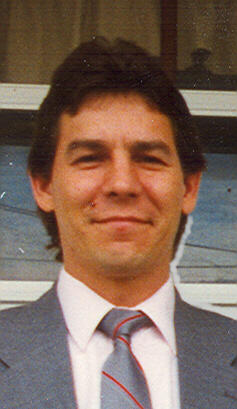 Robin Charles Burnham, 49 of Appleton, passed away on Friday December 10, 2010, at his home with his wife, Joanne, at his side after a courageous battle with lung cancer. Rob was born May 18, 1961, in Los Angeles, the son of the Betty and the late Luther “Bob” Burnham. He moved to Appleton in 1971 and attended Appleton West. He furthered his education at FVTC in electronic technology. Rob married Joanne Delchambre on September 9, 2000. Rob worked many years at Glatfelter Mill in Neenah, was then employed at Invensys/Foxboro, and lastly working full time with his own company, RCB Services. Rob loved music, guitars, animals, outdoor activities and the time volunteering at Heckrodt Wetland Reserve.

A special thank you to Kathy and Bob, Tom, Mark, Rich, Jim, Gail and Doug; the staffs at Theda Care at Home, AMC and Cherry Meadows, for their loving care.

A celebration of life in Rob's honor will be held December 18, 2010 at the HECKRODT WETLAND RESERVE, 1305 Plank Road Menasha, WI 54952 from 1:00-4:00 p.m. There will be a Tribute at 2:30 p.m. Rob's family welcomes friends to join in sharing memories and stories of their friendship with Rob. A memorial has been established in Rob's name.