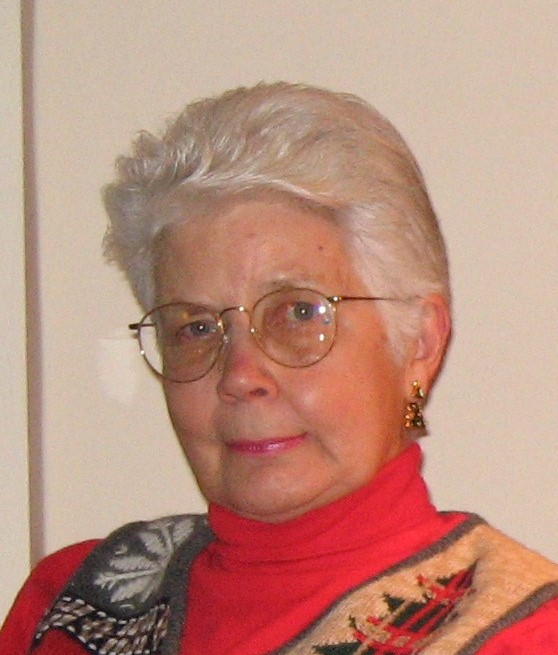 Roberta Shedden was 89 when she passed away Thursday, July 19, 2018 in Neenah, Wisconsin.

Born in Chicago, Illinois on July 31st, 1928, Roberta Clara Fischer was the fourth child of the late William Henry and Emma Louise Fischer, coming after Beatrice, William and Elthea. Death made frequent visits in Roberta's childhood. Her sister Elthea died at age thirteen in 1935, and her close brother, William, died at age 23 in a Japanese prisoner-of-war camp in 1943.

Young Roberta was quite shy but joined her church's youth group, beginning her lifelong involvement with the various churches to which she later belonged. She graduated from Amundsen High School in 1946 remaining active in her church youth group even while going to work for the Arrow Shirt company in downtown Chicago shortly after graduation. It was at a church youth meeting in the late 1940's that her future husband of 63 years would hear her laugh and seek her out for a date.

Warren Donald “Don” Shedden and Roberta Clara Fischer were married on August 11, 1951, while Don was on leave from the Korean War. They spent their first year of marriage separated by 6500 miles, but both their love for each other and their faith in God grew through the many letters they wrote to each other.

Upon Don's return, they had five children, Donna, Carl, who was born ill and died five months later, Lois, Ross, and Ruth. Before her children reached adulthood, Roberta was always heavily involved in their various activities; Girl Scouts, Boy Scouts, teaching and then running Sunday School and Vacation Bible School programs along with manning the church nursery on Sundays.

A favorite story, for which she tellingly, never expressed regret, revolves around the recurring midweek theft of homemade chocolate chip cookies kept in a tin in the daycare room of the church. It incensed Roberta that someone, most likely an adult since it took place midweek, was stealing cookies from children. She and a church friend concocted a scheme to make sure all the cookies in the tin, one week, were made with Ex-Lax. This ended the theft of the children's cookies and began a lifelong ethics discussion, and speculation about who the thief might have been and how they came to realize what had happened.

Roberta, along with her refined sense of right and wrong, worked for Manpower temporary agency for many years, bringing her hyper-organizational skills and her error-free, 90 wpm typing speed to several Fox Cities firms. She ended her career in 1999 at what began as Appleton's First National Bank but was BancOne by the time she retired from that firm's trust company at age 70.

After retiring, she edited her church’s senior newsletter for many years and published the newsletter for a Fox Cities senior computer club, in addition to volunteering with her husband Don at local soup kitchens and as election poll workers.

Roberta and Don enjoyed traveling together and were blessed to be able to make several cross-country plane and road trips around the United States, until his death in 2014. Besides traveling, Roberta loved reading, gardening, biking, and sewing.

She endured cooking as much as her family endured dining on the results. She had no use for TV; her favorite network: OFF. She loved winter and took her family on outdoor winter picnics to Chicago's lakefront Museum of Science & Industry, where the wind off the lake created strong memories for all involved. She despised gossip. She played tennis into her 50's and took long bike rides with husband Don, well into her 80's. She was meticulous; organizing her buttons by color and size but allowed a bit of chaos to enter her home as she allowed her children to have both a cat and dog at the same time.

Though a meticulous planner, she excelled at last minute challenges, like finding out over Sunday dinner son Ross needed a giraffe costume for that evenings church service. One TV console box, a broomstick, shoebox, some yellow bedsheets, two styrofoam cups, two tennis balls and a pair of socks and one can of brown spray paint later and suddenly there was a giraffe costume, complete with a hinged mouth controllable via a thin string, all ready for the church play.

She felt very strongly that rules should be obeyed, never receiving a traffic ticket, but believed conventions should be flouted. She absolutely believed in consequences and could be ridiculously rigid. Eldest daughter Donna thought she'd won a breakfast battle of the wills over a bowl of oatmeal, until that same exact bowl of oatmeal reappeared at lunch.

She could also be surprisingly emotional, still tearing up in her late 80's as she recounted hearing her father say at the funeral of her sickly since birth, five-month-old baby Carl: “I never even got to hold him.” Though grief and sadness were frequent visitors in Roberta's life, from childhood on, she, like her mother, Emma, before her, cultivated an iron-bound determination to have a positive, upbeat approach to life, always sharing spring's first crocus sighting or each season's first snowfall.

One of Roberta's best days in her later years was when her daughter Ruth and Ruth's husband Mike took Roberta and Don to Wausau where she, from memory, was able to locate her grandparents’ house where she spent many childhood summers and was taken on a tour of the house by the current owners who had just completely remodeled the house. 75 years had passed since she'd last been in that home and she thoroughly enjoyed being able to see the house where all those memories were made.

Daughter Lois provided another late life cherished memory for Roberta, going to Alaska with her during what was probably the very beginning of Roberta's dementia. Seeing the northern lights from above the Arctic circle and sitting in an outdoor hot spring in February. It pleased Roberta that she was able to travel like that later in life, as her mother Emma had traveled well into her 80's.

After, or perhaps shortly before her husband Don's death, Roberta developed dementia and Alzheimer's. Her friends and family helped her through the long slow goodbye of her sunny disposition and wit and intelligence. Each touched by the ever more rare reminders of days gone by; a certain look in her eye, the set of her chin, an off-kilter smile, or the poignantly neat and organized display of books on her end table, which she could no longer read herself, all carefully fanned out, perhaps driven by some desire to entice others to lose themselves in the stories within.

The memorial service for Roberta will be held at 11:00 AM on Monday, July 30th, 2018 at Appleton Alliance Church (2693 W. Grand Chute Blvd., Appleton). Visitation will be held from 9:30 until the time of service. In lieu of flowers, please consider a donation to the Cure Alzheimer’s Fund at https://curealz.org.¬† 100% of the donations made to this foundation are applied directly to finding a cure for Alzheimer’s disease.

The family would like to extend a heartfelt thank you to the staff of the Valley VNA in Neenah, Wisconsin and to Roberta’s ThedaCare hospice team which did a phenomenal job keeping her comfortable and free from anxiety and pain during their time with her.