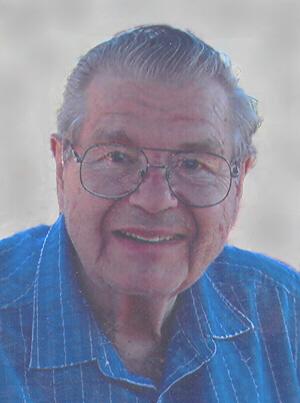 Robert W. Miller, 82, of Menasha, died on September 20, 2010, after a courageous battle with cancer. He was born on October 13, 1927 in Racine, the son of the late William S. and Pearl (Londre) Miller. Bob moved to Menasha when he was three years old and lived there the rest of his life. He graduated from Menasha High School Class of 1945. On March 4, 1950, he was united in marriage to Phyllis J. Wingrove in Oshkosh. They shared over 53 years of marriage together until her death on August 11, 2003. Bob was a printer by trade and retired from Graphic Communications in 1990. He was a very talented carpenter, having crafted many beautiful tables, cabinets, picture frames, etc. for his family and friends. It was his greatest joy to spend time in his beloved workshop. Bob had a great sense of humor. Although quiet in nature, Bob loved to make up jokes and created many nicknames for his family and friends over the years, not to mention his play on words, his ‚ÄúHibble-isms‚Äù as we called them, that we will remember for all of our years. Most of all, Bob enjoyed time spent with his family, who meant the world to him. He was a very special and unique, wonderful man and we will miss him deeply, but we know that he is now out of pain and is reunited with our beloved Phyllis. He fought so valiantly against this disease and never complained once, which was always so much in character for him. Dad we love you forever and as always, are so proud of you! Make sure and give Mom a hug for us all!!

The memorial service for Bob will be held at 11:00 am on Friday, September 24, 2010 at WICHMANN FUNERAL HOME TRI-COUNTY CHAPEL with Deacon Mark Farrell officiating. The family will receive relatives and friends on Thursday from 6:00 until 8:00 pm and again Friday from 10:00 am until the time of service. In lieu of flowers, a memorial fund has been established in his name.