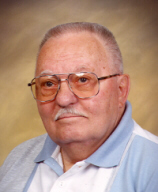 Robert W. Drephal, age 80, died unexpectedly on Saturday, September 17, 2005. Bob was born in Menasha on March 14, 1925, son of the late William and Nona (Muthig) Drephal. He was a 1942 graduate of the Menasha High School, and in June of 1943 enlisted in the United States Army. During his service, he was stationed in the European Theatre and saw action at the Battle of the Bulge. Bob was a member of the V.F.W., American Legion, Disabled American Veterans, and was also a P.O.W. His decorations were many, and included the Purple Heart and Good Conduct Medal. He was honorably discharged from the Army in October of 1945, and in November of that same year married the former Frances Van Schyndel; she survives. Bob was employed for many years as a mechanic for the Appleton Park Department and the Forestry Department. He was a co-founder, trustee, board member and thirty-five year member of the Teamsters Union Local #563 in Appleton. He enjoyed giving himself a few golf strokes on his scorecard, playing cards, and travel. Everyone will remember him as a ‚Äútinkerer‚Äù who was always puttering with something or another.

Bob is survived by his wife: Frances Drephal of Appleton; four loving children: Barbara (Ted) Miller, Judy Janus, Robert (Sue) Drephal, and Chuck (Joyce) Drephal, all of Appleton. His grandchildren were the apple of his eye, and he loved them all dearly. They include Brian Miller, Brett (Dana) Miller, Stacy (Mike) Van Handel, Debra (Jim) Longberg, Kim (Chuck) Jablonski, Bob Drephal, Jr., Elizabeth (Aaron) Anderson, Amber Drephal, and Brad Drephal; eight great-grandchildren: Collin and Cameron Miller; Paige, Rachel, and Nicholas Van Handel; Autumn Longberg; and Faith and Alex Jablonski; a brother: William (Pat) Drephal of Appleton; and a special niece Anne (Merlin) Hein. Bob is also survived by many brothers and sisters-in-law, nieces, nephews, and friends. He was preceded in death by his parents, a son-in-law Gordon Janus, and a great-granddaughter Abigail Longberg.

The funeral liturgy for Bob will be held at 6:00 PM Tuesday, September 20, 2005 (TODAY) at ST. THERESE CATHOLIC CHURCH, corner of Wisconsin Avenue and Morrison Streets in Appleton with Fr. Gerald Falk officiating. Military rites will follow the services at the church. Friends may call at the church on Tuesday (TODAY) from 3:00 PM until the hour of the mass.