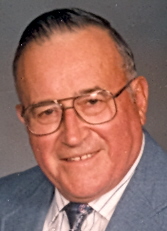 Robert W. Franz, 82, of the Town of Harrison, passed away at Parkside Care Center on Sunday, February 7, 2010. He was born on November 18, 1927 in the Town of Harrison to the late William H. and Hilda (Franz) Franz. On October 19, 1957 he was married to Joanne L. Carnot in Kaukauna, sharing 52 years together before his death. Bob graduated from Kaukauna High School with the Class of 1945 and served in the U.S. Army during the Korean War as a member of the 2nd Armored Division. He worked at International Papers in Kaukauna as a machinist retiring after 45 years and also ran the family farm in the Town of Harrison where he lived his entire life.

Bob was a life long member of St. John Ev. Lutheran Church in Woodville, where he served in numerous capacities throughout the years. He was a member of the Thilmany Quarter Century Club, the Fox Valley Two-Cylinder Club and the Sherwood American Legion Post 496. Bob was a Packer and Badger fan and enjoyed making wood crafts, gardening, fixing things around the home and telling stories and a good joke. He especially enjoyed getting together with his former Army buddies at numerous destinations in the U.S..

The Christian Funeral for Robert will be held at 11:00 am on Saturday, February 13, 2010 at ST. JOHN EV. LUTHERAN CHURCH, N9125 Military Road, Woodville. Rev. Paul Fanning will be officiating. Burial will take place at Highland Memorial Park, Appleton. The visitation will take place on Friday at the Fargo Funeral Home from 4:00 until 8:00 pm and again at the church on Saturday from 9:00 am until the time of service. In lieu of flowers, a memorial fund is being established.

Special thanks is expressed to Dr. Bruce Danz, the staff at Colony Oaks and Parkside Care Center, the ThedaCare and Home caregivers and friends, neighbors and relatives for their help, support, visits and prayers.