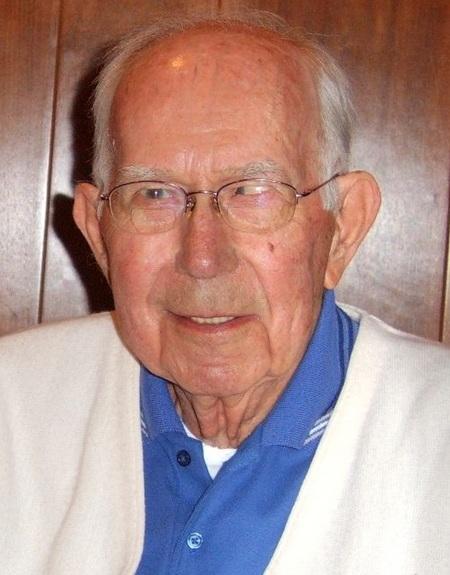 Robert A. Remmel, age 91, passed away on Friday, October 12, 2012, at his home. He was born to Arthur and Anita Lavernse Remmel on March 2, 1921 in Milwaukee Wisconsin. He graduated from Wauwatosa High School in 1938 and became a student at Marquette University. At Marquette he was an active member of Alpha Chi Fraternity and held leadership and service positions in the student body.

After graduation from Marquette he attended Midshipman University in Columbia, New York, was commissioned as a lieutenant in the US Navy, and served as a PT boat captain in the South Pacific until 1946.
He met the love of his life, Gloria Wahler Remmel in 1941 and they were married in 1945 in Milwaukee while he was at home on leave. She unfortunately preceded him death shortly before their 67th year of marriage. He began his career in the life insurance business before leaving the Navy and received a special commendation from the US Department of Navy for converting the most GI issued life insurance in that period of history. As he worked to establish his business, he also was also employed by the Boston Store and Aetna Insurance Company in Milwaukee.
In 1954 he left Milwaukee to establish his life and business in Kimberly, Wisconsin. Remmel and Associates, Inc, an insurance brokerage firm is now a third generation business in Appleton, Wisconsin.
He had a strong sense of civic obligation and as member of the Kimberly community he held leadership and service positions. He served the community as a charter member the Kimberly Kiwanis Club where he served as club president, and held positions on the Village Planning Board for many years. He served as President of the Fox River Valley Association of Life Underwriters and was a member of the American Society of Charter Life Underwriters. He was a member of Christ the King Lutheran Church in Combined Locks.
He remained an avid sports fan and enjoyed the Milwaukee Brewers, the Green Bay Packers, Wisconsin Badgers as well as the local Kimberly youth sporting events. In addition to his wife, he is preceded in death by his parents, his brother Donald Remmel. He is survived by his son Darrell Remmel, (Kay) of De Pere, WI, very exceptional grandsons Ryan Remmel and John Remmel, his sister Audrey Arnold (Lester) of Rice Lake, WI. special niece Susan (Don) Levy of Nashvile, TN and privileged Bischon Buffy now of De Pere.
Funeral service will be held at 11:00 a.m. Tuesday, October 16, 2012, at Jansen-Fargo Funeral Home, 204 East Kimberly Ave, with Rev. Tim Krick officiating. Friends and family may call at the funeral home from 9:00 a.m. until the time of service. Entombment will take place at Highland Memorial Park, Appleton. Online condolences may be expressed at www.wichmannfargo.com
In lieu of flowers the family requests donations sent to the local humane society.
Special thank you to Eva Snider and Barbie Helwink for all your care, support and comfort that was given to Robert through your special home care. Your kindness will never be forgotten.