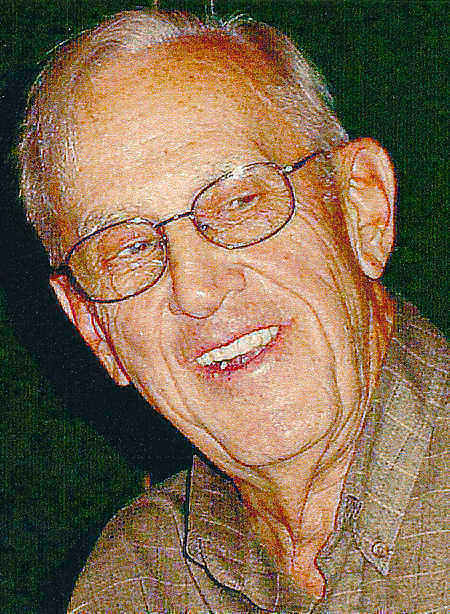 Robert J. “Bob” Pack, age 88, passed away with his family by his side on June 15, 2012. He was born in Menasha on September 10, 1923, the son of Edmund and Ingeborg (Rasmussen) Pack. He served our country in World War II with the 13th Armored Division in Europe as a forward observer.
Bob married his beautiful wife and soul-mate Betty DeLong on June 1, 1946. They spent 62 loving years together before she preceded him in death on April 23, 2009. Bob and Betty spent twenty fantastic winters in Florida before moving back to their beloved hometown of Menasha in 2007.
In 1950, Bob joined the Menasha Fire Department and stayed until 1966 having achieved the rank of Captain in charge of Training and Inspections, a department which he created. In 1966 he joined the George Banta Co. as Safety Director and stayed there until his retirement in 1987. Bob also served the City of Menasha as a police and fire commissioner for twenty years.
Throughout his life he was known as a wonderful wood craftsmen and carver (Bob the builder). His life-long love for golf was highlighted by a hole-in-one at age 80.
Bob is survived by his loving children: Christine (Richard) Runge of Haines City, FL; Tim (Jane) Pack of Hayward, WI; Steve (Jeri) Pack of Menasha, and Connie (Mike) Lewandowski of Delafield, WI; eight grandchildren: Kurt (Tiffany) Runge, Jennifer (Rick) Rho, Suzi (Chris) Lagerquist, Mike (Krista) Pack, John and Nikki Pack and Natalie and Gage Lewandowski; eight great-grandchildren: Taryn and Karly Runge, Lauren and Rachel Rho, Dylan, Maya, and Owen Pack, and Anikka Lagerquist. He was preceded in death by Betty, an infant son, John; his parents, a brother Don Pack, and a sister Marian Van Berkel.
A Mass of Christian Burial will be held at 11:00 AM on June 22, 2012 at ST. MARY'S CATHOLIC CHURCH, 212 Appleton St, Menasha; with Father Richard Allen officiating. Friends and family may call at the church from 9:30 AM until the time of Mass. Burial will take place at St. Mary's Cemetery, Menasha.
Bob's family would like to extend a sincere thank you to the staff at Gardens of Fountain Way for their compassion and caring, friend and physician Dr. James Burns and their staff at Heartland Homecare. In Lieu of flowers a memorial fund in Bob's name is being established.
Online condolences may be expressed at www.wichmannfargo.com