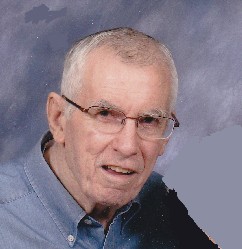 Bob Valentyn, age 84, passed peacefully into the arms of the Lord early on Sunday, July 3, 2011 at St. Paul Nursing Home. Bob was born in Kimberly on June 22, 1927, son of the late Peter and Anne (Smits) Valentyn. He attended Kimberly High School and was elected class president all four years. Upon graduation in 1945, Bob proudly reported to the Army Air Corps where he served a tour of duty in the Azores, working mostly as a cryptographer. Following the war, he began his career at the Kimberly mill of Kimberly Clark Corporation. At the time of his retirement after forty-two years he was a Packaging Specialist at KC-West in Neenah. Bob married Althea Vanden Boom on August 6, 1949 at Holy Name of Jesus Catholic Church. He became a valued and respected leader at the parish, serving as Parish Trustee. He was on the Parish Council and Building and Grounds Committee and acted as a CCD instructor. Bob created the position of and served as the Business Administrator for the parish. He was a member of the Knights of Columbus and held the honor of Grand Knight. He also served as president of the Holy Name Society. His dedication to the Green Bay Diocese Cursillo movement was marked by his work on the Cursillo Secretariat and as rector on many Cursillo weekends. He also sat on the Diocesan Parish Council. Bob's ability to lead was embraced and admired in the community as well. He served on the Kimberly Area School District School Board and participated in the Kimberly Papermaker Booster Club. He was a member of the William Verhagen Post #60 of the American Legion. In his leisure time, Bob enjoyed golfing at Countryside Golf Course and playing cribbage with the “cribbage gang.” He was a great lover of a broad variety of music and an avid fan of sports of all kinds, especially the Milwaukee Braves and Brewers, the Packers, and the Badgers. Close to forty years of cottage rentals in Summit Lake, WI provided many family memories. Preserving those memories and others and keeping family connected was important to Bob. For twenty two years, he wrote The Valentyn Chronicles, a weekly letter detailing family happenings, and sent them to each of his children. Bob served as the chairman of the St. Paul Nursing Home Development Council, helping raise monies necessary to build the current St. Paul Complex. It is fitting that the wonderful people at St. Paul were able to care for him during the last years of his life.

He leaves behind his beloved wife: Althea Valentyn of Kimberly as well as six children and their families:

Tim (Nancy) Valentyn of Verona and their children Kenzi, Brett, and Connor Valentyn.

Mary (Mark) Pribbenow of Kimberly and their children Leah and her fiance Nicholas Dobrinska, and Luke and Ben Pribbenow;

Anne (Peter) Appleton of Kimberly and their children Rachael and her fiance Christopher Peterson, and Sam, Paul, and Clare Appleton.

The funeral liturgy for Bob will be held at 12:00 Noon on Wednesday, July 6, 2011 at Holy Spirit Parish, 600 E. Kimberly Avenue in Kimberly, with Fr. David Pleier officiating. Interment will take place in the parish cemetery. Friends may call at the church on Tuesday after 4:00 PM and again on Wednesday morning from 10:00 AM until the time of the liturgy. Visiting hours Tuesday evening will be concluded with a parish prayer service at 7:00 PM. In lieu of flowers a memorial fund is being established in Bob's memory. Donations can be made to the Holy Spirit Parish Endowment Fund or to St. Paul Elder Services.

The family thanks Dr. Monk Elmer, the staff at ThedaCare Physicians, Kimberly, and the wonderful caregivers at St. Paul Elder Services, Kaukauna, for their compassionate care. The faithful prayers and support of the Holy Spirit Parish Family will never be forgotten.

Bob's faith was the foundation for his life. Obediently using the gifts he was given, Bob helped to build God's Kingdom on earth. He was a kind, gentle, humble man whose greatest joy was his family. He was a devoted husband, father, grandfather, great-grandfather, and a friend to many. Bob was deeply loved by those blessed to know him and will be greatly missed. His legacy will live on in those who choose to love and serve as Bob did.

“This is what the Lord asks of you, only this: to act justly, to love tenderly, and to walk humbly with your God.” Micah 6:8