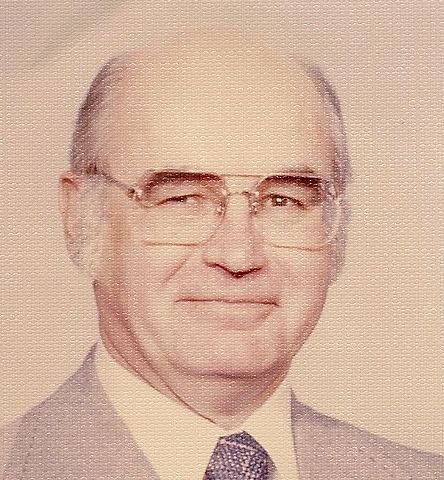 Robert L. Mach, age 88, of Appleton, passed away on Saturday, March 30, 2013, at Cherry Meadows. Robert was born on February 16, 1925, in Antigo, to the late Wenzel and Mabel (Jones) Mach. He married the former Bette Knoebel on June 18, 1947, in Antigo, and they celebrated over 59 years of marriage; she preceded him in death on April 28, 2007. Bob was a graduate of Antigo High School and the University of Wisconsin School of Banking in Madison. He spent his career in the banking and insurance industry for over 44 years, serving the communities of Antigo, Park Falls, Wrightstown, Lone Rock, and Prairie de Chien. He held many titles in the banking business, from bookkeeper to president, and served on the Board of Director for three banks. After retirement, he continued to work for Menards for six years, and the City of Appleton as a ramp cashier for seven years. Bob proudly served his country in the United States Army from 1944 to 1946 in the 872nd Field Artillery Battalion, and 18 months in the European Theater in WWII. He also served in the Wisconsin National Guard in the 32nd Infantry Division from 1949 to 1952.

The Funeral Liturgy for Robert will be held at 11:00 a.m. on Thursday, April 4, 2013, at ST. BERNARD CATHOLIC CHURCH, 1617 S. Pine Street, Appleton. Fr. Dennis Ryan and Fr. Gerald Falk will be officiating. Friends may call at Wichmann Funeral Home downtown chapel from 4:00 pm until 7:00 pm on Wednesday, with Deacon Michael Eash conducting a prayer service at 7:00 PM. Friends may call at the church on Thursday from 10:00 am until the time of mass. Entombment will be at Riverside Cemetery in Appleton. Military Honors will be observed at the cemetery. In lieu of flowers, a memorial fund has been established in his name. Online condolences can be expressed at www.wichmannfargo.com.

A sincere thank you to Father Dennis Ryan, Father Gerald Falk, and Deacon Michael Eash for their visits and spiritual blessings.

A very special thank you to the staff at ThedaCare at Home Hospice; especially the nurses and aides, for the wonderful care and help shown to our dad. Also, the nurses Erin, Dawn, and Christine, along with his CNA, Trisha, who were so compassionate to Bob over the past months.