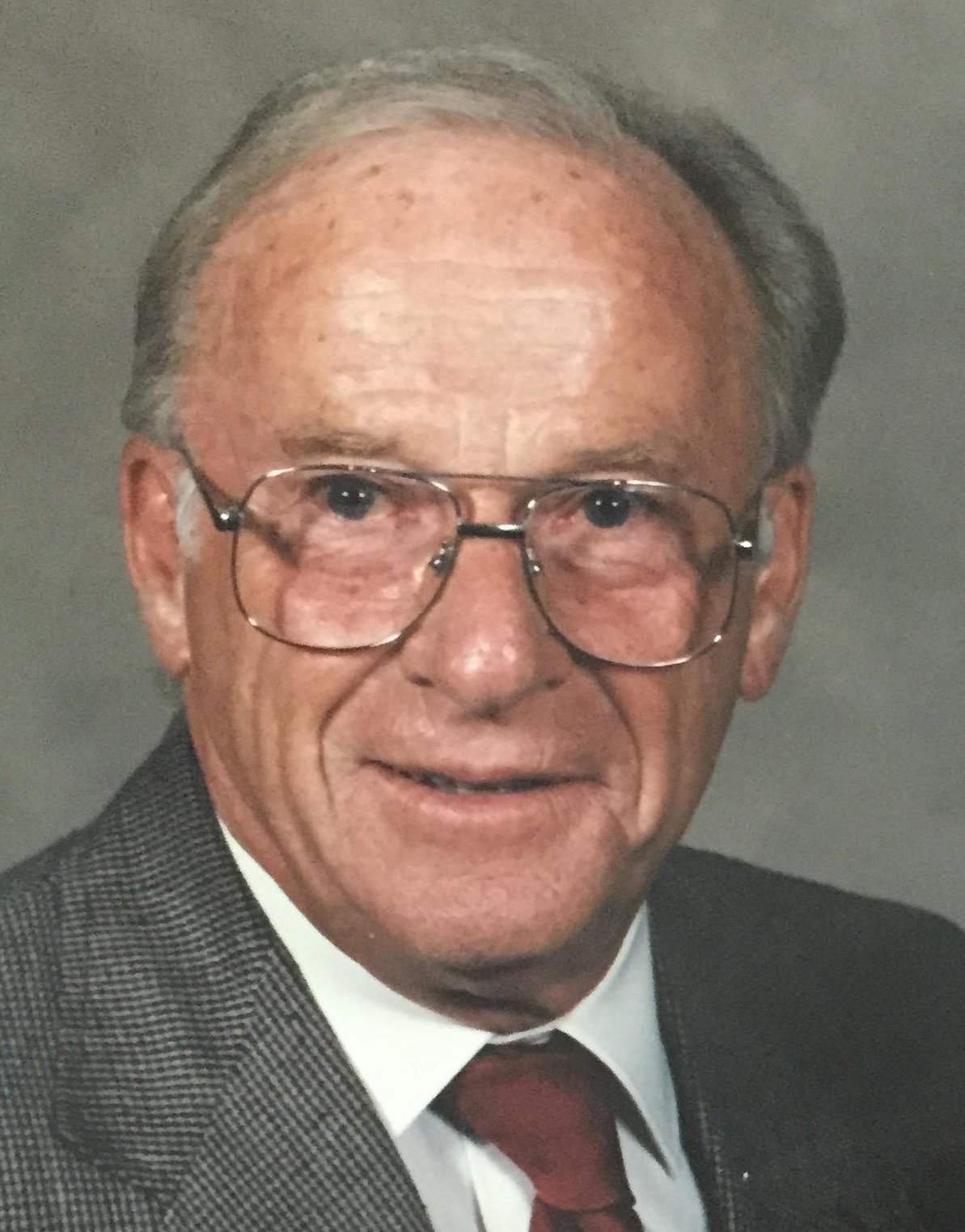 Dr. Robert Burns, age 92 of Kimberly, passed away at his home on Saturday afternoon, July 18, 2015. His daughters were at his side.

Robert Burns was born in Kaukauna, Wisconsin on November 10, 1922, the son of the late Daniel and Florence (Campbell) Burns. He attended St. Mary's school in Kaukauna and a small country school in Askeaton. He graduated from Kaukauna High School in 1940. In 1941 and 1942 he attended Marquette University, taking evening courses in accounting and business law, while working in the payroll office at Cutler-Hammer during the day. Bob met Virginia “Ginny” Moore in 1941. He entered the US Army Air Corps on February 3, 1943 and attended Louisiana State University taking courses in Air Corps Administration.

Bob then served in a personnel office at Selfridge Field, Michigan. While stationed there and on leave, Bob and Ginny were married at St. Thomas Aquinas Church in Milwaukee on October 23, 1943. He then entered the Aviation Cadet Training Program and attended North Carolina State University. He remained a cadet until he was discharged from the service on December 5, 1945.

After being discharged, Bob returned to Marquette University School of Dentistry and graduated in 1951. Bob and Ginny chose to practice in Kimberly, to be near friends and relatives. He was active in the American Dental Association and Past President of the Outagamie County Dental Society. He also served as President of Kimberly State Bank and was on the Board of Directors of Associated Bank. He was a member of the Knights of Columbus and the American Legion Post #60.

In 1976 he was selected as a potential recipient of the Alumnus of the Year Award by Marquette University. He was honored to be the Rally Master for the Kaukauna High School Class Reunion in 1988.

The Burns family took many wonderful trips together through the years with their children. They loved their many visits to Ireland and all the people they met there. Those visits inspired him to build an Irish cottage in Askeaton. The family has enjoyed spending time there since 1972. Bob and Ginny also found time to travel to Nassau, Bahamas where Bob treated needy dental patients several times.
In 1980, Bob wrote a book about some of his life experiences entitled, “A LUCKY PERSON HAS ONLY TO BE BORN”. He enjoyed writing it and loved hearing from those who have enjoyed reading it. A patient once wrote to him, “As a dentist, your life has been 'full-filling'”. And it was!

Bob was a loving father, Buppa and Great Buppa. He was a kind and sensitive man who helped many in his lifetime. He was witty, charming, clever, and full of Irish humor. Bob was proud of his family and he loved them all dearly. It was always a pleasure for him to sing with his three sons, and when he did, they called themselves, “The Burns Boys and Sometimes Dad.”

Bob was preceded in death by his parents, his beloved wife Ginny in 2002, his sons Michael in 1991, Patrick in 2008, and Thomas in 2011; his three siblings: Jack (Ruth) Burns, Betty (Art) Lauer, and Daniel (Rose Marie) Burns; a brother-in-law: Ronald Dietzen; and Ginny's parents George and Florence Moore.

The funeral liturgy for Bob will be held at 11:00 AM on Friday, July 31, 2015 at HOLY SPIRIT CHURCH, 600 E. Kimberly Avenue with Fr. Bob Kollath officiating. Family and friends are welcome to gather at the church on Friday morning from 9:00 AM until the time of the Mass. Bob will be buried with the rest of the Burns family at St. Patrick's Cemetery in Askeaton on Saturday morning with full military honors. For more information and to share memories and condolences, please visit www.wichmannfargo.com.

The entire Burns family would like to thank Michael Leet, a family friend who lived at Dad's home for over three years. Mike's presence allowed Dad to remain in his own home, and that was so very important to him. Mike's light-hearted nature, patience, and care for Dad were so appreciated.

Our family also wishes to thank Kathy Vogel who helped Dad and Mom for over twenty years. She continued to help Dad after Mom passed away, and was especially important to him as she became not only a friend but also a caregiver. Kathy often referred to Dad as, “Dr. Cutie.”

We would like to thank the Affinity Hospice staff, especially Laurie, for their care and concern for our dad. We would also like to thank Vikki Graf for her recent, dear friendship with Dad. Vikki was always willing to be there when we needed her and Dad enjoyed her company.

Very special thanks go out to the many people who showed our dad kindness in his elderly years. It will always be remembered.

Dad, we love you and we will miss you. Please give Mom, the boys, and all of our dear ones a hug from us – until we meet again! Honore, Katie and Maggie