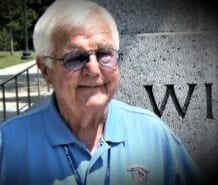 Robert “Bob” Hickinbotham, age 96, passed away peacefully on Thursday, October 8th. Bob was born on April 1st, 1924 to the late Arnold and Sara (Reitzner) Hickinbotham in Appleton WI. Bob served in World War II as a Tec 5 Radio Operator in the 635th AAA Battalion of the Army from April 1943 – November 1945. He saw European ground combat and was at the Battle of the Bulge. He received 4 overseas service bars, 1 bronze & 1 silver battle star, a good conduct medal and a victory medal. He also made Mission 24 (6/17/2014) Old Glory Honor Flight with his son Michael.

Bob owned Fox Valley Radio & TV in downtown Appleton where he loved to be for over 50 years. He was an exceptional and avid golfer, playing until he was 91 years old.  He was a longtime member of Butte des Morts golf club where he used to caddy as a kid, and always played during his extensive travels with his wife Betty.  He loved watching the Packers play, had season tickets and attended the infamous Ice Bowl of 1967 at Lambeau Field!  In the early years Bob loved to bowl. He and Betty also belonged to dinner club and dance club, providing lively entertainment through the years. In later years he loved to work in the yard and could be found outside any chance he could get. He will be remembered for his quick wit and loving spirit. “Oh boy Bob!”

The family would like to thank the care givers at Brookdale Appleton Assisted Living and Cherry Meadow Hospice as well as the nurses at St. Elizabeth hospital and Doctors Chybowski and Baum for taking good care of him.

Due to current circumstances, a private burial service for both Bob and Betty will take place at Highland Memorial Park at this time.  A celebration of their lives will take place in the summer of 2021. Family and friends will be notified of the date and place at that time.

To leave a special memory or condolences for Bob’s family, please visit wichmannfuneralhomes.com.