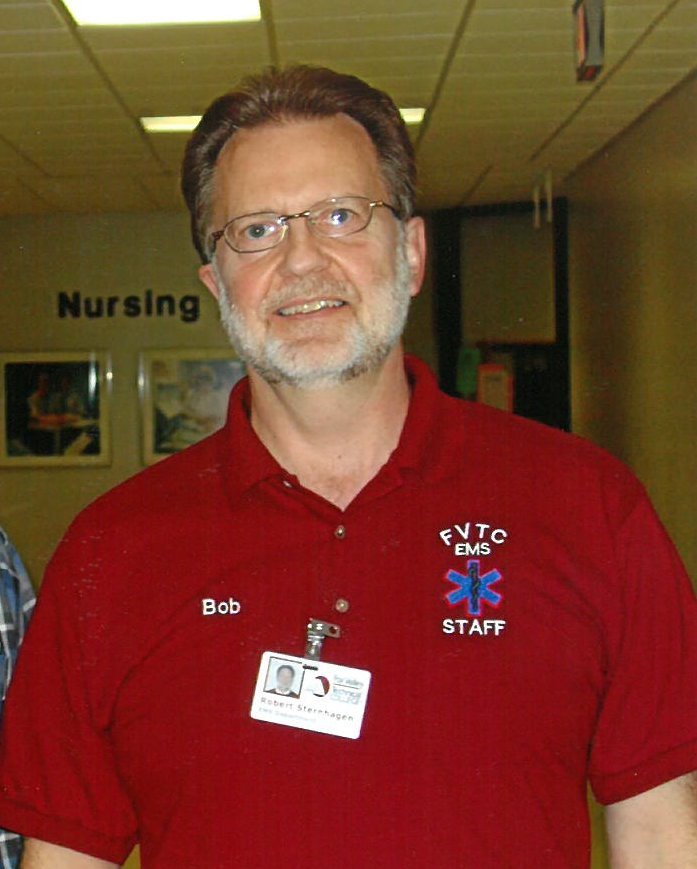 Robert G. Sternhagen (Bob), age 67, of Appleton ended his journey with cancer peacefully at his home on Thursday November 3, 2016 surrounded by his family and friends. Bob was born on January 5, 1949 in Appleton, to Victor and Evelyn Sternhagen as the fifth of seven children. In 1986 he married Linda Rickert on a beach in Maui, Hawaii; on December 4th they would have celebrated their 30th wedding anniversary. Together they had two sons, Garrett and Bryce, who were Bob's pride and joy.

Bob spent his 40+-year career in emergency medical services (EMS), an interest that started early when Bob went on emergency calls as a teen in the late 1960s with his brothers. Shortly after, Bob began as an EMT with Gold Cross Ambulance. At that time, EMS was in its infancy. Along with his intense interest in learning, Bob's knack for teaching appeared early. As a student, Bob was already assisting St. Elizabeth Hospital's faculty in teaching CPR to the rest of the class. In 1974, with 7 years of ambulance experience, Bob was the first EMS instructor hired by the Wisconsin Technical school system. Treatment guidelines were still being developed statewide and nationally when he started. Bob's contribution to developing the original pulseless non-breather protocol has helped to save many lives.

In the early days there were only six EMS instructors for the entire state. When the demand for training was too great, the decision was made to include the Technical Schools in EMS training. For the 1974-75 school year, Bob traveled weekly, usually at night, in all sorts of weather, from southern Washington County to northern Outagamie County teaching EMT courses. Bob participated in the Wisconsin EMS council in Madison to help secure federal funding support for the Fox Valley program as well as others around the state. In 1975, Bob began training paramedics, and continued to do so for many years. Bob's vision for a high-tech facility that trains paramedics, nurses, medical assistants, and other emergency response students and professionals came to fruition in the fall of 2013. His one-man simulation facility became a 66, 000 square-foot, three story Health Simulation and Technology Center on the Appleton campus of the Fox Valley Technical College. Fox Valley Tech is considered one of the top human patient simulation centers in the nation thanks in large part to Bob.

In October 2016, Bob received the Honorary Star of Life award from the Professional Ambulance Association of Wisconsin for his commitment to, and support of, emergency medical services throughout the Fox Valley. Another of Bob's highest honors came in September 2016 when Dr. Susan May, President of Fox Valley Technical College, established the annual Robert G. Sternhagen Innovation through Technology Award as a tribute to his pioneering work in advancing technology and innovation at the college.

Bob is survived by his wife: Linda; his two sons: Garrett and Bryce; their dog Charlie; his sisters: Marilyn “Tootie” Odegard, Cindy (Dan Mueller); his brothers Lee (Barb) Sternhagen, Gary (Laurie) Sternhagen; in-laws Joe and Pat Rickert, Vicky and John Parks, Tammy and Kevin VandeYacht, Lisa Rickert and Eric Ebersberger, Rick Rickert, Terri and Jeff Countney, and many nieces and nephews whom he loved. Bob is predeceased by his parents Victor and Evelyn Sternhagen, his brothers Jim and Don, and Don's wife Nancy.

A celebration of life will begin at 5:00 pm on Wednesday November 9th, 2016, at Fox Valley Technical College, 1825 N. Bluemound Drive in Appleton. The celebration will be held in the commons (enter through door 10). A full agenda can be found at www.wichmannfargo.com. In lieu of flowers, donations to the memorial fund established by the Fox Valley Technical College Foundation in support of the Robert G. Sternhagen Innovation through Technology Award are appreciated. Donations will be accepted for this award through FVTC Foundation on-line at
https://www.fvtc.edu/Community-Alumni/Foundation-Alumni/Foundation-Payment
in person, or by mail.

Linda, Garrett, and Bryce wish to thank all of the medical personnel who were part of Bob's journey, including the hospice staff.