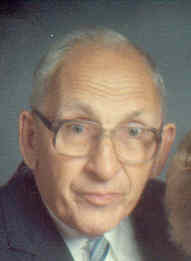 Age 89, passed away on Wednesday, July 2, 2003 at his home. He was born on May 11, 1914 in Seymour Wisonsin the son of the late Andrew and Martha (Brauer) Rusch. He served his country in the Army Air Corp during World War II being honorably discharged as Technical Sergeant. He served in the European, African, Middle East, and Asiatic Pacific theaters, and was awarded the Bronze Star Medal of Honor for the invention of a radio navigation device. Bob attended the University of Wisconsin-Stout, U.W. Green Bay, and U.W. Oshkosh. On August 12, 1950 he married Jean Gregg in Racine, Wisconsin. Bob was self-employed as an electrical contractor in Seymour, WI, was employed by Fox River Paper Company in Appleton, but spent most of his working life in the avionics industry being employed by Green Bay Aviation at Austin-Straubel Airport in Green Bay. He logged many thousands of hours as a commercial pilot. Bob was president of the Institute of Electrical and Electronic Engineers. In his later years, he developed a kind and gentle nature and volunteered many years in various international humane organizations and also was interest in the preservation of our National Parks.
He is survived by his wife Jean of Appleton, his sister Geraldine Peterman of Appleton, his nephew Brian A. (Vickie) Rusch of Appleton, and his great nephews and niece Michael, Bailey, and Joshua; his niece Elizabeth (Steve) Mendleski of Arkansas, and other nieces, nephews, relatives and friends. He was preceded in death by his parents, and two brothers Roger and Gerald.
A funeral service will be conducted on Sunday, July 6, 2003 at 6:00 PM at the Wichmann Funeral Home with the Rev. Pete Reinl officiating. Interment will take place at Highland Memorial Park. Friends may call at the funeral home on Sunday from 4:00 PM until the time of the service. A memorial fund is being established.
WICHMANN FUNERAL HOME
537 North Superior Street
Appleton 920-739-1231