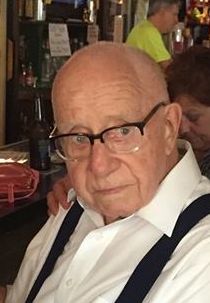 Robert F. Lichtfuss, 96, passed away at Grand Horizons, on Friday, July 12, 2019. He was born on December 20, 1922, in Oshkosh, the son of Frank and Martha (Binder) Lichtfuss. Bob attended St. John’s Grade School, and graduated from St. Peter’s High School. He attended the University of Wisconsin at Madison, and graduated with a degree in Mechanical Engineering. Bob enlisted in the US Navy in November of 1942, and was a WWII fighter pilot. He was then recalled for the Korean War, where he flew fighter jets.

After the Navy, Bob worked as a mechanical engineer at American Can, Zwicker Knitting Mills, and Appleton Coated Paper Co (Appvion), retiring after 26 years in 1982. He was united in marriage to Marie Ann “Marion” Weisheipl on October 17, 1953, at Sacred Heart Church, Oshkosh. Bob enjoyed fishing, especially the Canada trips, golf, bowling, and deer hunting.

Bob was preceded in death by his wife: Marion; brothers: Richard and Ken “Worm”; sisters-in-law: Lorraine, Arlene and Carol; and a brother-in-law: Herman Diener.

Funeral liturgy will be held at 11:00 am, on Saturday, July 20, 2019, at St. Mary Catholic Church, 312 State St., Appleton, with Fr. Bill Swichtenberg officiating. Interment will be in Sacred Heart Cemetery, Oshkosh. Visitation will be Saturday at the Church from 9:00 am until 10:45 am. Full Military Honors will be presented at church immediately following the Mass. In lieu of flowers, memorial contributions are appreciated to St. Mary Catholic Parish, Appleton.

Robert’s family would like to extend a heartfelt thank you to the staff of the Appleton Retirement Community, Grand Horizons, and Ascension Hospice for their care and compassion.