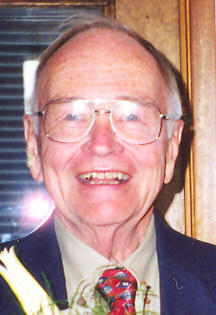 He proudly served his country in the Army during WWII, both in Europe, and the Pacific. Bob was past president of McMahon Associates, an engineering and architectural civil service company in the Fox River Valley founded by his father, and currently known as The McMahon Group.

He will be remembered for the love of his family, unfailing generosity, infectious sense of humor, and love of travel with Rita in their R.V. They would go wherever four wheels would take them, and even to the ‚Äúends of the earth‚Äù to visit their family.

The funeral service will be at 12:00 p.m. on Monday, October 11, 2010 at the Wichmann Funeral Home, Tri-County Chapel, with Dr. D. Michael Crow officiating. Friends will be received at the funeral home on Monday from 9:00 a.m. until the time of the service. Burial will be in Appleton Highland Memorial Park.

The family extends a special thank you to Appleton Medical Center and Appleton Health Care Center for their wonderful care of Bob and his family, and Dr. N. Carter Noble, a good and loyal friend who has been of great service to us for over 30 years.

In lieu of flowers, memorials in Bob‚Äôs name may be given to any of his favorite charities:

‚ÄúBut I do not want you to be ignorant, brethren, concerning those who have fallen asleep, lest you sorrow as others who have no hope. For if we believe that Jesus died and rose again, even so God will bring with Him those who sleep in Jesus.‚Äù (1Thess. 4:13, 14 The Holy Bible, NKJV)