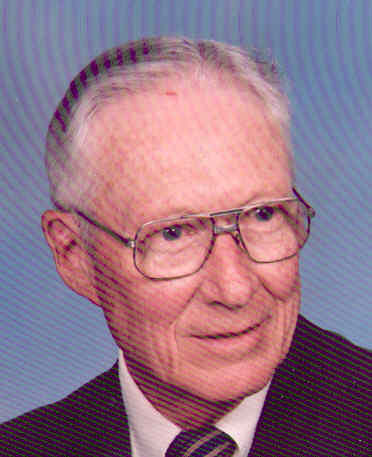 Age 88, passed to eternal life August 25, 2003, in Appleton, after a
courageous battle with multiple myeloma and its complications. Family
and friends will remember Bob as a caring and loving gentleman whose
passion for serving the community benefited numerous Appleton
organizations.

Robert Rae was born December 25, 1914, in Sioux City, Iowa, to parents
Gladys Geyer Rae and Robert Ferguson Rae. During Bob's teenage years
he lived in Des Moines, Iowa. After obtaining a B.S. degree in
mechanical engineering from Iowa State University and participating in
the ROTC training program, Robert was commissioned as a second
lieutenant in the U.S. Army Reserves, Corps of Engineers. It was
during this period that he married his college sweetheart, Catherine
Carlin, of Des Moines, IA. Because of his reserve status, Bob was
called to active duty six months before war was declared in 1941. Four
years were spent in various areas of the US training troops. In the
fifth year of this military service, Bob had attained the rank of major
and was the operations officer of a combat engineer battalion directed
to the Phillipine Islands.

Upon returning to the US in 1946 as a civilian, Robert took employment
at the Institute of Paper Chemistry in Appleton. As plant engineer, he
oversaw the buildings of the campus for 35 years. It was during this
time that Bob shared his time and talents with many community
organizations in Appleton.

One of Bob's earliest service roles was being on the Salvation Army
Advisory Board, and later being the President. Bob was a longtime
supporter of the Appleton YMCA. He chaired the building committee when
the present facility was being built. He served several terms on the
YMCA Board of Directors and was President of its Board for two years.
Peabody Manor was also the recipient of Bob's generosity as he served
many years on its Board of Directors and one year as President of its
Board.

As a longtime member of Memorial Presbyterian Church, Robert served his
church on the endowment committee for many years, and as an elder. He
was a longtime member of Riverview Country Club and served a term as
President in 1970. More recently, he enjoyed retirement years with
members of the R.O.F. breakfast club. Bob was an enthusiastic builder
and flyer of radio-controlled model airplanes and was a member of the
Valley Aero Modelers. He shared this interest with the Boys and Girls
Brigade.

The family wishes to extend gratitude to Dr. William Guenther, Dr. Mark
Chelsky, and the staff and support personnel at the Heritage and
Peabody Manor, and especially the Pine Creek section, for their loving
and thoughtful care.

A memorial service will be held at Memorial Presbyterian Church, 803 E.
College Avenue, Appleton, on Friday, August 29, at 1:30 PM. Visitation
with the family will take place in the church parlor from 12:45 –
1:30PM. A reception celebrating Bob's life will follow the service in
the church fellowship hall. In lieu of flowers, memorial gifts to
Habitat for Humanity or Memorial Presbyterian Church would be
appreciated.