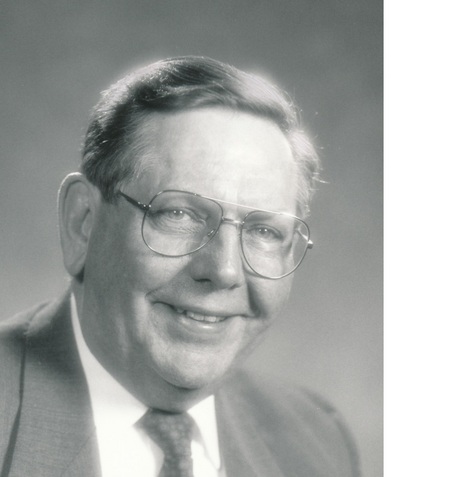 A remarkable man who never rested is now at peace and resting with the Lord. Robert Carl Splieth, born to parents Alma Lueck and Carl Splieth on March 19th, 1931 in Kenosha, Wisconsin, passed on Wednesday, June 27, 2012 at Appleton Medical Center from post-cancer treatment complications. Robert was baptized and confirmed in the Lutheran faith and attended Bradford Kenosha High School. In 1972 he received his Bachelors of Science in Business Administration from Marquette University.

His marriage to Delores Kathryn Cecchini on June 30, 1951, would set off a great love story and adventure. Together they would raise five children, manage job relocations to various Wisconsin cities, and enjoy vacations camping. Bob loved skiing and sharing his love of golf with his wife, kids and grandkids.

His 37-year career with Wisconsin Bell (now AT&T) began working as a Lineman. He retired at the end of 1991 as a District Manager. Highly respected and loved, he would form bonds with his work friends that would culminate into a weekly coffee visit in the hospital cafeteria in post-retirement years.

Robert continually challenged himself through life by also assisting others. He served in the National Guard and was an active member of the Rotary Club of Appleton West, serving as president from 1983-1984. Since 1976, Robert and Delores served the Lord as members of Mount Olive Ev. Lutheran Church, where he played a significant role in fund raising and support for the church.

Robert and Delores spent their long deserved retirement on a regular fitness schedule and enjoyed their home and family. Avid travelers, they enjoyed multiple trips to Europe and closer to home visits with their children and grandchildren: The eldest son: Glenn Splieth and his partner Travis Rigby in Portland, Oregon; daughters: Kristine Splieth in Atlanta; Lynn (Michael) Wirl and their son Jon in Sun Prairie; Diane (George) Light and their children Jacob, Andrea, and Carolyn in Stillwater, Minnesota; and Roberta (Steve) Neels and her stepdaughter Kalin in St. Louis, Missouri. He was also survived by a sister: Dorothy Merten of Kenosha; a brother-in-law: Ben Ziolkowski of Racine; and Delores' siblings: Tom (Doris) Cecchini of Racine; Richard Cecchini of Kenosha; Adam (Sandy) Cecchini of Kenosha; Dennis (Celeste) Cecchini of Salt Lake City; and Valmina (John) Wilda of Racine. He was adored by his many nieces and nephews. Bob was preceded in death by his parents, sisters Ruth Ziolkowski and Margaret (David) Menser, a brother-in-law Joseph Merten, and a sister-in-law Nancy Cecchini.

The Christian Funeral for Bob will be held at 10:30 AM on Friday, June 29, 2012 at MOUNT OLIVE EV. LUTHERAN CHURCH, 930 East Florida Avenue in Appleton, with Rev. Joel Zank officiating. Interment will be in Highland Memorial Park. Friends may call at the funeral home on Thursday (TODAY) from 4:00 PM until 7:00 PM, and again Friday at the church from 9:00 AM until the time of the service. Online condolences may be offered at www.wichmannfargo.com