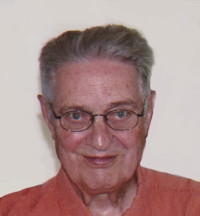 Robert Behling, 84, of Appleton, passed away unexpectedly on Thursday May 17, 2012 at St. Elizabeth Hospital. Robert was born on May 12, 1928, son of the late Fred and Rosella Behling. After graduating from Kimberly High School in 1946, Bob went on to earn his B.S. in Physics from Lawrence University in 1950. Shortly after college he served in the United States Army. Bob had an outstanding work ethic, working summers during college at the Kimberly-Clark Mill. He then took a job in finance at the Oscar J. Boldt Corporation where he worked for over 30 years.

Bob had many interests and talents. He enjoyed music as well as taking photos and developing his own film. He enjoyed wood working, taking pride in building his own cottage on Lake Winnebago. One of Bob's favorite activities was gardening and lawn work. He found great joy in giving flowers to people.

A memorial service will be held on Wednesday May 30, 2012 at 6:00 PM at the WICHMANN FUNERAL HOME (537 N Superior St, Appleton WI) with Father David Belongea O.F.M. Cap. officiating. Friends may call at the funeral home from 4:00 PM until the time of service. A memorial fund will be established in Bob's name.

The family would like to thank the caregivers at Rennes Health and Rehabilitation Center, and Home Instead for all of their love and support through the past year.