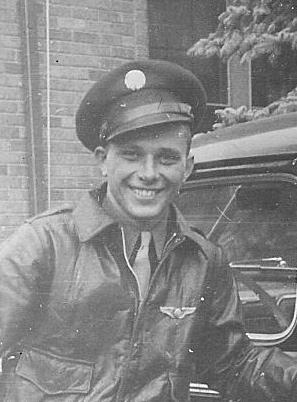 Robert Michael Balliet, age 88, passed away with his family by his side at St. Elizabeth Hospital on November 13, 2012. Bob was born in Appleton on March 28, 1924, to the late Stephen D. and Irene M. (nee Alberty) Balliet. He was the youngest of three children.

He enlisted in the Army Air Corps in 1942 and served in the European Theater during WWII. Bob flew out of Italy on nineteen combat missions with the 776 Squadron of the 464 BG of the 15th Air Force. His B-24 bomber was shot down over Zagreb, Yugoslavia, on May 29, 1944. Bob was captured by the Nazi Germans and imprisoned at Stalag Luft IV, a POW camp near Danzig (currently Gdansk), Poland. After surviving a 500-mile “Black March” westward from Pomerania across northern Germany in extreme winter conditions, he was liberated on May 6, 1945. Bob's personal account of the march is part of Wisconsin Public Television's Wisconsin WWII Stories series.

Upon his return, he went back to work for the Telephone Company until his retirement in 1985, ending a career of 43 years at “Ma Bell.” After retirement, Bob took on a part-time job as a bonded courier for Bay Title & Abstract, Inc. for about ten years and a full-time job as Grandpa Extraordinaire.

Bob married Helen “Sis” Moder on February 15, 1947, at St. Mary's Catholic Church. They enjoyed 62 years together until she passed away on January 20, 2009. They raised four children together.

Bob and Sis enjoyed many good times with family and friends at their 3B Tree Farm in Waushara County near Wild Rose, WI. Since 1958, over 200, 000 trees have been planted to transform an abandoned corn farm into a family legacy tree farm.

For years, Bob met with his coffee group at the round table at the Radisson Paper Valley Hotel for great times with loyal friends. He traveled with Sis and the kids all around the United States and Canada. In 1979, Bob and Sis ventured to Europe to visit the site of his POW camp in Poland behind the Iron Curtain.

He was preceded in death by his wife Sis, his son David “Bear” Balliet, his brother Stephen “Teet” Balliet, Jr., and his sister Irene “Tudy” Strutz.

The family wishes to thank those who cared for Dad with us after Mom died. This includes Dr. Deborah Schultz and the staff at Brewster Village Heritage Square II, where he resided since April 2011, and his caregivers when he was still living in his home on Packard Street: Mary Wilz, Mary Hurley, Rhonda Cummings, Pearl Hodkiewicz, Camarra Schmude, and Peg Ebben. We also wish to thank Dr. Steve Coenen and the V.A. staff at the John H. Bradley Center in Appleton, his good neighbors Sarah and Larry Radloff, and our special family friend Marilyn Shutte.

You were a great dad, a wonderful husband, a cherished friend, a hard worker who provided for your family, a member of the Greatest Generation who loved your country and took citizenship seriously, a good Democrat, a conservationist, and a caretaker of many others. Your outgoing social nature and smile lit up many a heart and room. We will miss you and honor all of the life lessons we learned from you.