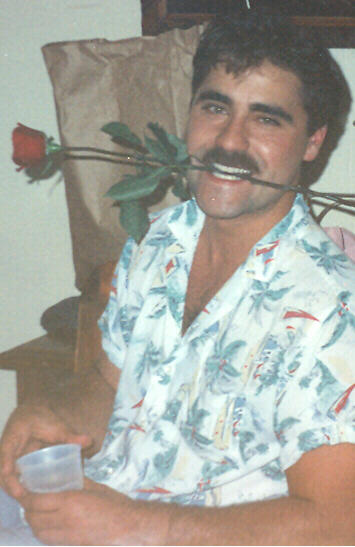 Roberts, Robert Alan
(Rob)
Died on June 3, 2008 after an extended illness. Rob was born in Appleton on June 26, 1964. Rob was the son of Jo Ann (John) Van Mun. Rob graduated from Kimberly High School in 1982. He attended Fox Valley Technical School and received an Associate's Degree in Marketing. Rob later attended the University of Wisconsin at Stout where he graduated summa cum laude with a BS in Loss Prevention and Inventory Control. Rob was in the top five of his class. Rob did an internship with 3M in their Aeronautics Division at the St Paul, MN Facility in 1989. He then worked for Mc Dermott Plumbing and Heating Company out of Oshkosh, WI in Procurement and Purchasing. From 1998 to 2006 Rob
held the position of a Product Manager with Kraft Foods Corp. Rob was musically talented as well.

Rob was adept at playing guitar, banjo and various other stringed instruments. Impersonating Elvis Presley was one of Rob's favorite things to do. Rob loved to entertain people. Rob enjoyed his uni-cycling and always grew an
exceptional vegetable garden. Rob also enjoyed his time out on the golf
course. Rob was extremely intelligent and gregarious. He had many long-time
friends all of who shall miss him. Rob was well-liked and admired by many.

Rob was preceded in death by his Brothers Danny and Dave;Uncle Jim; Cousin
Bobby; and Aunt Kay. His Maternal and Paternal Grandparents further
preceded him in death.

The shape of a life is never clear until that life is over.

Rob, your family loved you so very much. We wish we
had the answers for you. You will be so missed, dear Rob.

Funeral Services will be held at 11 a.m. on Saturday June 7, 2008 at the funeral home with Fr. Gerald Falk officiating. Visitation will be held from 9 a.m. until the time of services. A memorial is being established.