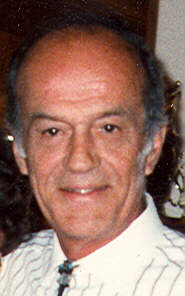 Robert A. Larscheid, of Appleton, 74, died Sunday morning, June 13, 2004, following a brief illness. He was born July 2, 1929, to the late Peter and Ruth (Vande Zande) Larscheid in Green Bay and had been a Appleton resident for 44 years. Bob served with the U. S. Army, Second 9th Company, 31st Division from 1951-1953, he was stationed in Korea and was awarded the Bronze Star. He had been employed by Nabisco for 38 years retiring in 1991. Bob enjoyed pheasant hunting, fishing, stamp and coin collecting. He had been an avid Packer fan and season ticket holder. Most of all he enjoyed spending time with his grandchildren. He was a member of St. Bernadette Catholic Church, Airborne Rangers Association and the Grand Chute VFW Post #8642. Survivors include his wife, Joyce L. (Hoagland) Larscheid, to whom he had been married for 49 years; four children, Robert T. Larscheid, Appleton; Joyce M. Jessogne (David Piontek), Whitelaw; Thomas R. (Nora) Larscheid, Milwaukee; Janice M. (Dan) Popple, Ogdensburg; seven grandchildren, Cassandra, Heather, Jennifer, Ella, Gaston, Durant and Macey; a brother and sister-in-law, Donald and Arleen Larscheid, Green Bay; a sister, Jean Terrien, Green Bay; three sisters-in-law, Jeri Larscheid, Green Bay; Elaine Larscheid, Green Bay; Mildred (Clyde) Patzke, Menasha. He is further survived by numerous nieces and nephews. He was preceded in death by two brothers, Lloyd and Jack Larscheid and a brother-in-law, Arnold Terrien. The funeral liturgy for Robert will be held at 11:00 am, Thursday, June 17, 2004, at ST. BERNADETTE CATHOLIC CHURCH, 2331 East Lourdes Drive, with Father Harold Berryman officiating. Burial will be in Appleton Highland Memorial Park. Friends and relatives will be received FROM 4-8 pm, WEDNESDAY AT THE WICHMANN FUNERAL HOME, 537 NORTH SUPERIOR STREET and at the church from 9:30 am Thursday, until the time of the mass. A parish prayer and scripture serice will be held at 7:00 pm Wednesday. A memorial fund is being established.